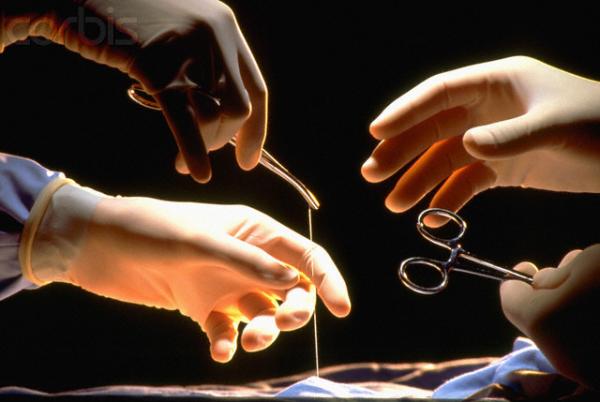 If you have been following the activities of Doc Jazz, you probably know that he has been invited by the Southern California chapter of PCRF (Palestinian Children's Relief Fund) to perform on their annual Healing Hands Gala.

This gala, which helped in raising funds for medical assistance to Palestinian children through PCRF, took place on October 13th 2012 in Anaheim, California.

Honored by the invitation, and inspired by the heart-warming humanitarian and medical activities of PCRF, Doc Jazz – who happens to be a surgeon himself, as you probably know – composed a song that pays homage to the Healing Hands that cure Palestinian children who are unable to obtain treatment for their ailments..

Stare It in the Face 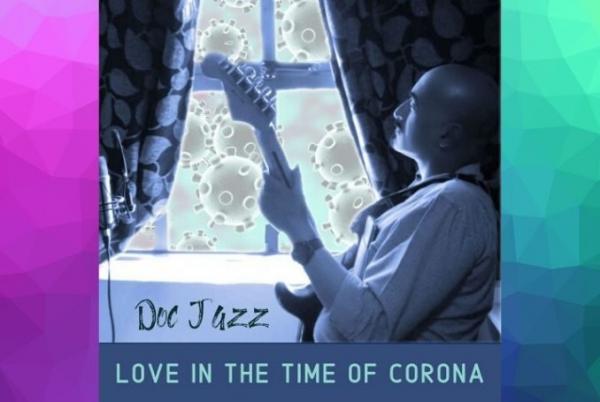 [2015]
Lyrics, music, all vocals and instruments, recording and mixing by Doc Jazz.
Album: Love in the Time of Corona [2020]

Inspired by the proud attitude of the Palestinian resistance, but applicable to any struggle against injustice ..
I stare it in the face…
(continua)
inviata da giorgio 18/4/2020 - 19:42 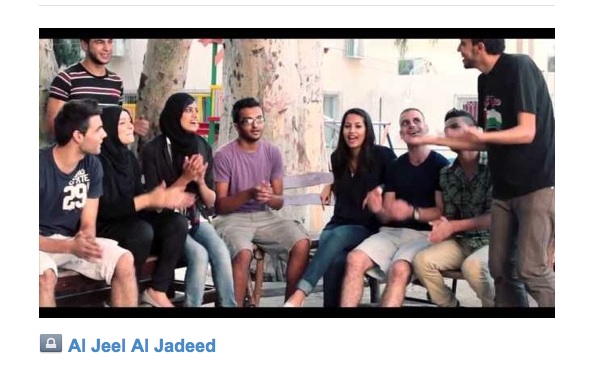 ‘Al Jeel Al Jadeed’ is an Arabic song by Palestinian artist Doc Jazz. This music video for the song was directed by Palestinian artist Shahd Abusalama in Gaza, involving more than 20 youths from a variety of backgrounds. The song sends a strong and empowering message of unity, tolerance and equality, with a positive vibe that is needed to counter the wave of sectarian strife in the Arab world ..
يا عالم شوفو شو اللي عم بيصير
(continua)
inviata da giorgio 17/4/2020 - 10:29
English (non-rhyming) version
THE NEW GENERATION
(continua)
inviata da giorgio 17/4/2020 - 11:22 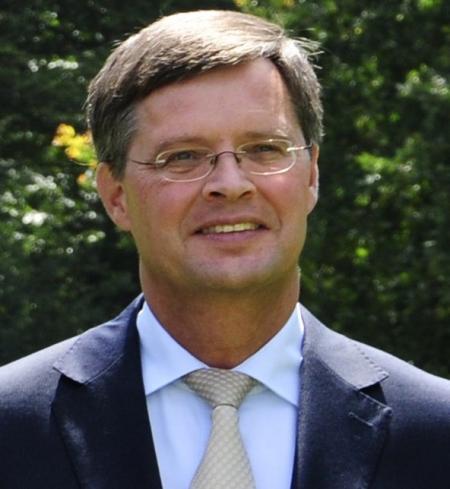 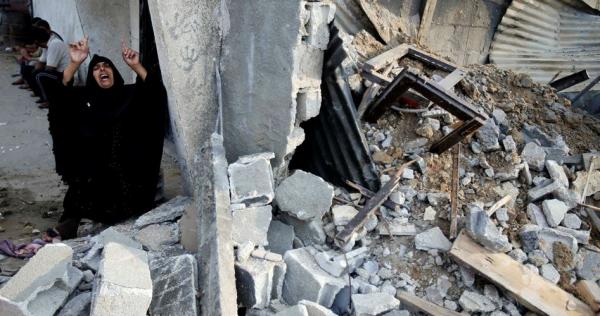 [2002]
This song commemorates the Jenin massacre by the Israeli army in 2002.
Desolately looking at what once was home
(continua)
inviata da giorgio 12/4/2020 - 09:34
Percorsi: L'Olocausto Palestinese 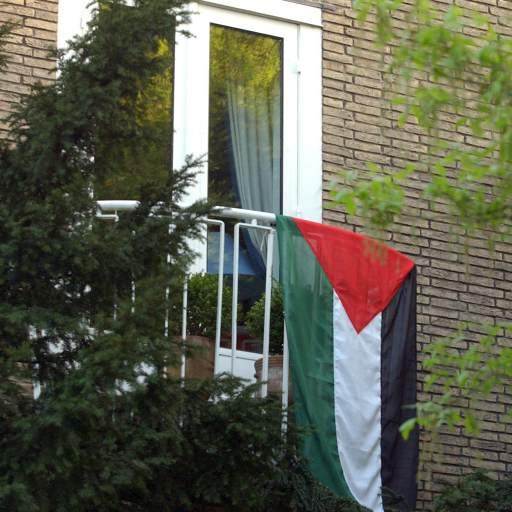 Gretta Duisenberg, the wife of the late ex-president of the Europese Centrale Bank (ECB), in 2002 hung a Palestinian flag from her balcony to protest against the illegal Israeli occupation.

This song was aired by Felix Meurders on VARA Radio "De Ochtenden". 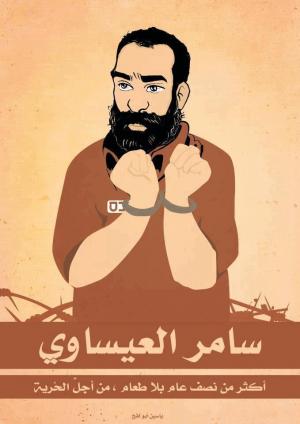 A rap song dedicated to the incredible bravery of Samer Issawi, on hunger strike in an Israeli prison, and to all other Palestinian hunger strikers.

Samer Issawi followed in the footsteps of other famous Palestinian hunger strikers such as Khader Adnan, Hanaa Al Shalabi and Mahmoud Al Sarsak, who - along with many others - protested against the inhumane Israeli practice of administrative detention. This song is sung from a first person perspective, and aims to empower the courageous message that these brave people send while resisting against injustice.
You'd think you'd read about me in the New York Times
(continua)
inviata da giorgio 19/4/2013 - 09:22
Percorsi: L'Olocausto Palestinese 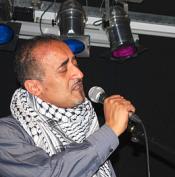 This song is dedicated to Basem Abu Rahme, 29 years old, who was non-violently protesting the theft of his village's farmlands and was shot dead by the Israeli Occupation Forces. Read his story here http://palsolidarity.org/2009/04/6273

The song expresses support for the people's struggle against the Israeli Apartheid Wall in Bil'in and Nil'in, on the West Bank in Palestine. People there are waging daily non-violent protests against the confiscation of their lands and their livelihood, while the armed forces of Israel respond with live ammunition and have injured and killed several people in this way.
! أنظر
(continua)
inviata da giorgio 31/1/2010 - 23:03
Percorsi: L'Olocausto Palestinese
English version - الترجمة العربية
Here is the (non-rhyming, and non-literal) English translation - although when you translate something, it's bound to lose some of its luster:
WATCH!
(continua)
inviata da giorgio 31/1/2010 - 23:07
Per Riccardo e Lorenzo:
Perfetto. Temevo che avessi trascurato qualcosa.. Ho visto che avete sistemato anche qui sopra, ma anche i punti esclamativi vanno a sinistra, come nel testo originale (nonostante in molti standards-compliant browsers appaiono a destra).

Situated just west of Ramallah, the Palestinian village of Nilin has lost huge swathes of land to Israel's settlements and its wall in the occupied West Bank. In a year and a half of resisting construction of the wall, five villagers have been murdered by the Israeli military while demonstrating. Hassan Mousa is a coordinator of the Nilin Popular Committee Against the Wall and Settlements and the uncle of Ahmed Mousa, an 11-year-old boy who was the first villager from Nilin to be killed by the Israeli army.

A song about the inalienable right of Palestinians in the Diaspora to return to their homeland. Featuring Susanne Alt on saxophone. Jawhara on background vocals. All other vocals and instruments by Doc Jazz.
You are like the olive tree
(continua)
inviata da giorgio 26/3/2012 - 08:15
Notes

(1) In this song, Doc Jazz addresses the new generations of Palestinians living in the Diaspora. In the first verse they are compared to the olive trees of Palestine. They are inseparable from the Palestinian landscape; they are an important part of the identity of the land and the people of Palestine. Over one million of these precious trees have already been uprooted by the Zionist invaders, and this uprooting is compared in the song to the violent expulsions of hundreds of thousands of Palestinians from their land in 1948 and 1967. The younger generations are called upon to cherish their roots.
'Right of Return' also gives a defiant reply to the infamous words of the first Prime Minister of the Zionist state, Ben Gurion, referring to how Palestinians will deal with their expulsion. He said: «The old will die, and the young will forget». In this song, Doc Jazz stresses that the... (continua)
giorgio 26/3/2012 - 08:44

Up-tempo groove calling on people to realize that Palestinians are people like everyone else, and therefore have a right to enjoy fundamental human rights.
(People.. Real People..)
(continua)
inviata da giorgio 10/12/2010 - 08:28

THIS SONG is dedicated to all the brave people who set sail to break the siege of Gaza, and to the nine martyrs of the Mavi Marmara, who were brutally murdered by the Israeli navy. Hopefully this song helps to inspire more and more flotillas! Free Palestine, Free Gaza !
In the memory of those who fell
(continua)
inviata da giorgio 1/7/2010 - 08:46

Run For Your Life 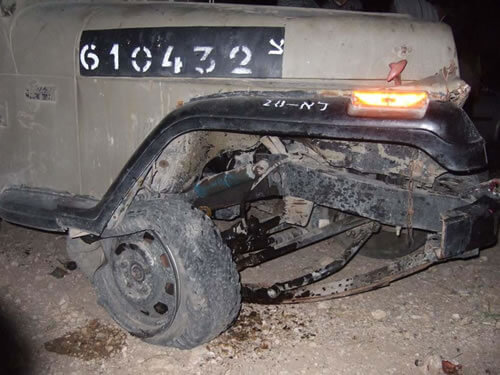 This song is dedicated to Jannah and Masa Foqha, 8 and 10 years old, murdered April 29th 2010 by an Israeli army jeep. Anger at the Zionist murderers over their deaths was further increased by the absence of public fury and media attention, hence the Gil Scott-Heron inspired intro.
Our revolution is never televised,
(continua)
inviata da giorgio 2/6/2010 - 12:25
Percorsi: L'Olocausto Palestinese

Fly In The Soup

"Ain't it a nuisance! The ad said 'Four star, top of the bill' - just false promises ... truth is, this song is a protest against the politicians who are slowly (and slyly) changing our democracies into police states..."
Well you can say what you wanna say
(continua)
inviata da giorgio 31/1/2010 - 08:55

No Justice, No Peace

The newspaper - and the politicians - are full of talk about Peace ... and still many are disappointed or surprised that after many years of 'talks', nothing has been achieved. Why? Because one must aim for Justice, before one can attain Peace.
Like a sea
(continua)
inviata da giorgio 28/1/2010 - 12:59

Doc Jazz
[2010]
Lyrics, music and performance by Doc Jazz
It's 2010 - and the major powers of this world are still using the logic of the stone age ... so this funky song calls for 'Soulvation'! The Doc Jazz definition of this concept: justice - not greed - as the main basis for a peaceful world.
Save your energy we've heard it all before
(continua)
inviata da giorgio 28/1/2010 - 09:49

"The often propagated “American Way”... check out the other side of the coin ...
If you understand this song as hatred towards Americans you are wrong ... take it as an encouragement to turn the USA in a peaceful nation instead of a nation of warmongers!"
I've had enough of seeing the world
(continua)
inviata da giorgio 20/11/2009 - 08:31

A redo of the 2004, leaning more towards R&B than the original (more jazzy) version. 'If you want to know where peace is ... you know Justice leads the way' ... song about the essential value of Justice in finding the solution to the conflict.
– Justice leads the way
(continua)
inviata da giorgio 20/11/2009 - 08:28

A song I wrote in the memory of Marwa Al Sherbini - pregnant and mother of a 3 year old son - who was stabbed to death in a courtroom in Dresden, Germany, during a lawsuit against her Muslim-hating neighbor who had been harassing her.
As horrible as this already sounds, the story is even worse than this: not only was she stabbed to death with a knife in the presence of armed security guards, but in front of the eyes of her husband and her 3 year old son. Instead of protecting Marwa, the security guards shot and almost killed the husband, who was trying to protect his wife from the stabbing frenzy. The husband was hospitalized and was finally stabilized.
As unimaginable as this horrendous murder already may seem, this heinous crime was still made worse by one thing, namely the criminal silence of European mass media about this event.... (continua)
What can you do
(continua)
inviata da giorgio 19/11/2009 - 08:47
Still about Marwa Al Sherbini
http://en.wikipedia.org/wiki/Murder_of...
giorgio 20/11/2009 - 08:24

Bring Down The Wall

New (rock) version of the song denouncing the internationally condemned Israeli Apartheid Wall that Israel is building on Palestinian land.
Near your picture on the mantelpiece lies a souvenir
(continua)
inviata da giorgio 31/12/2008 - 21:34
The Dutch version of "Bring Down The Wall": no to the Israeli Apartheid wall!!
De Nederlandse versie van "Bring Down the Wall": nee tegen de Israëlische Apartheid muur!

This song is dedicated to all Palestine's children, especially those growing up in the largest prison on earth, the Gaza strip.
Children of Gaza,
(continua)
inviata da giorgio 19/11/2009 - 08:15
Percorsi: L'Olocausto Palestinese

The Wall Must Fall

Are you still unfamiliar with the harsh reality of Israel's colonization schemes, covered up by pretty stories about peace wishes? If so, read up on reality - check out Stop The Wall

Israel is enjoying its immense military overweight over the Palestinians, and practicing massive repression of the population, while counterattacks have become a rarity ... doesn't time fly when you''re having fun? But the primitive practice of racist Apartheid will not be without its price...
Time flies
(continua)
inviata da giorgio 19/11/2009 - 08:11

This recording is dedicated to one of the great leaders of the Palestinian resistance, Abd el Aziz al Rantisi, who was assassinated by Israel on April 17th, 2004.
Rantissi:
(continua)
inviata da giorgio 31/12/2008 - 21:38

Song calling out against the so-called 'War on Terror', and calling upon the Netherlands to withdraw their troops from Afghanistan and end their allegiance to the Bush regime.
De wereld is kleiner geworden
(continua)
inviata da giorgio 28/12/2008 - 12:47
One verse of the original poem was left out in the song:

Song calling out for non-violent resistance to free illegally occupied Jerusalem (officially Jerusalem is not and cannot be the capital of Israel, though this appearance is often given).
Well I know it's always been part of this world
(continua)
inviata da giorgio 24/12/2008 - 20:09

Anti-war song: time to exert democratic pressure upon our governments to withdraw from all colonial-style militarism!
Look at the world: Every brother of a brother is a rival - in the new century
(continua)
inviata da giorgio 19/12/2008 - 20:38

Vice-Minster of 'Defense' of the state of Israel, Vilnai, admitted that Israel is committing a Holocaust against the Palestinian people. This song also unmasks the gatekeeper-role in European politics !
Break the silence (Holocaust in Gaza)
(continua)
inviata da giorgio 19/12/2008 - 19:35

Song calling upon American soldiers, who participate in the illegal occupation of Iraq, to listen to the voices of their consciences.
Never thought you'd ever be here did you now
(continua)
inviata da giorgio 17/12/2008 - 20:47

An urgent appeal to free the almost 400 Palestinian children locked up in Israeli jails, often without a formal charge and without proper legal procedures.
Take Huda - She was taken in a raid
(continua)
inviata da giorgio 16/12/2008 - 20:25
Percorsi: L'Olocausto Palestinese

A Song For Jenin