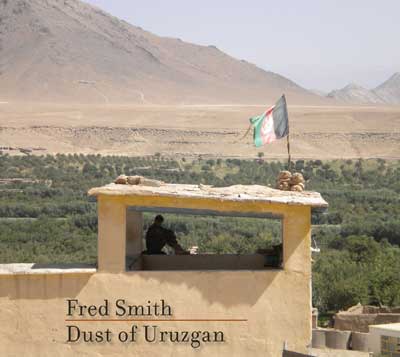 Dust of Uruzgan (2010)
While working in Uruzgan, he entertained the Dutch and Australian troops stationed there. On his return to Australia from Afghanistan he released an album entitled "Dust of Uruzgan", consisting of songs responding to the war in Afghanistan.
In the ring they called me “Warlord”, my mother calls me Paul
You can call me Private Warren when your filing your report
As to how I came to be here, this is what I understand
In this hospital in Germany from the Dust of Uruzgan

I had just turned 28, just bought a new car
When I joined the first Battalion of the Big 1 RAR
We were next up for deployment into south Afghanistan
To combat the insurgence in the Dust of Uruzgan

It’s a long way from Townsville not like any place you’ll see
Like suddenly you’re walking through from the 14th century
Women under burkhas, tribal warlords rule a land
Full of goats, and huts and jingle trucks is the Dust of Uruzgan

And the Education minister can neither read nor write
And the Minister for Women runs the knock shop there at night
They’ve been fighting there for ever over water, food and land
Murdering each other in the Dust of Uruzgan

But the Taliban are ruthless, keep the people terrorized
With roadside bombs and hangings and leaving letters in the night
And they have no useful vision for the children of this land
But to keep them praying on their knees in the Dust of Uruzgan

I was on the west flank picket, propped there with Ben
There to keep a watchful eye out while the other blokes went in
We looked for signs of danger from the TTPs we’d learned
But the Nationals were moving back and forth without concern

I was a Queensland champ Thai Boxer now I look south of my knee
And all I see is bed sheets were my right foot used to be
Benny’s dead and buried underneath Australian sand
But his spirit’s out their wandering through the Dust, the Dust of Uruzgan