We Don't Want Your War

Words and music by Jynkz 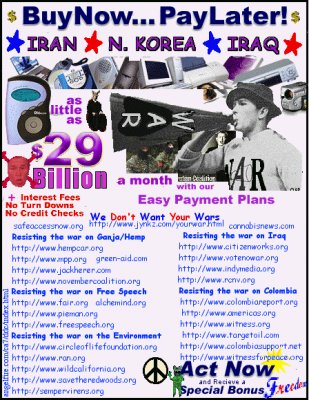 The Anti-War Movement has an Anthem

The anti-war movement declares it has an anthem. "We Don't Want Your War" is being played by protesters worldwide as the song by musician Jynkz strikes an emotional chord.

If you haven’t heard it yet you will. It’s traveling fast and far as computer-savvy war protesters worldwide have embraced a song written by San Francisco musician Jynkz. The anti-war fans are using the Internet to hurl emails and post links about the song faster than you can say, "We Don’t Want Your War".

"Now we have an Anthem", writes web publisher Lew Rockwell giving Jynkz front page coverage on his tremendously popular anti-war Web site, LewRockwell.com. "We Don’t Want Your War is nothing short of heroic", Rockwell proclaims. And he isn’t the only one that thinks so. Downloads of the song from the Jynkz web site are skyrocketing. Fans are coming from all over the US and all over globe to listen.

"I’ve received emails from Singapore, Mexico, Holland, Italy… it’s phenomenal", states Jynkz. Some visitors leave a brief message on his site but most come to download the song. Jynkz gives the song away for free as his way of raising the noise to oppose war with Iraq. Many fans also come to see the gut-gripping music video of the song, which depicts stirring images that question the validity of the Bush administration’s push for war.

"I wanted to do something," explains Jynkz, "and music is my way of expressing how I feel. I’m thrilled to have contributed a song that can really touch so many people." And touching he is, tens of thousands of people have visited his site in the two weeks the song has been out and the numbers are increasing daily, especially now that radio stations in the US and Europe are beginning to play it.

Jynkz lives in San Francisco, California, where he writes and records his own music. He has recently released his second solo CD. His unique style and expressive vocal technique give his music the kind of drama that people can feel. Feel it for yourself by visiting his web site at http://www.jynkz.com.
When you can't believe a word they say
And you're haunted by the swords they raise
Like a rabid dog we've seen before
They refuse to hear the world pounding, pounding down their door

The king has no clothes so he leads by fear
We must challenge all the lies we hear
The devil's 'bombs' has an oily smell
Frames a legacy with infamy and he burns it, he burns it into hell

Try to turn us into lemmings with their magic on TV
Leaking military secrets is one of their specialties
To reporters hanging on their words like schoolgirls in love
They've got the scoop, but we're no closer to the truth

If we raise our flag on a million graves
Will we all be proud or will we be ashamed?
Of our leadership, greedy and arrogant
And we'll all be judged by the choices, the choices that we made