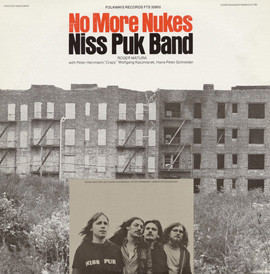 Forse la canzone più nota di questa misconosciuta band tedesca trapiantata negli USA…
Salvo fire of machine guns were tearin' up omnious springtime's silence
a row of decayed shacks were shattered,
the traps of the terrorized population turned into ash
thousandfold echoes of wailin' mothers must have reached
the golden thrones of those ones,
who were hidin' behind the heinous deeds

Somoza's goons tortered a scruffy kid
whom they imputed to assist the Sandinistas
with a malicious howl they hung the halfdead body
on a wooden paling upside down
the whining of the perishing kid, covered blood.
could be perceived far into the night

While Somoza's soldiers were butcherin' civilians,
he, ministers and landlords sipped delightfully at champagne
his mechanism of oppression still works perfectly
but one day the rebels are gonna crush the fat maggots
with guns of justice and freedom in their hands

Guerillas are in impenetrable jungles, in streets
of the working-class districts, they ain't afraid to die
with strong love for their country, the tyrannized
population on their side
the spirit of Che Guevara will lead them to a better world.