[1984]
Written by Brian May
Scritta da Brian May
Album: The Works

"This is an anti-nuke song, written by Queen's guitarist Brian May. Hammer to fall should be interpreted as 'nuclear bomb coming down'. It's was a moderate rock hit in Europe (although I think the overdone 80s production makes the song sound 'over-compressed'). It featured on Queen's The Works album (da questa pagina). 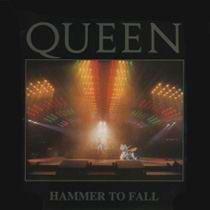 "Hammer to Fall" is a 1984 hard rock song written by Brian May and performed by the British rock group Queen with Freddie Mercury on lead vocal. It appeared in their 1984 album The Works.

It was the fourth and final single to be released from that album, although the single version was edited down by thirty seconds in contrast to the version on the album. Different sleeves were used to package this single and the live picture sleeve is now a collector's item. The song was also the subject of a popular music video directed by David Mallet, in which was a regular live performance of the song by the band in Brussels during the Works Tour (Roger Taylor can be seen wearing a "Choose Life" t-shirt in the video). The song harks back to the Queen of old, with a song being built around a hard angular and muscular riff.

The song was a concert favourite and was also played at Live Aid. A different version of the song with the first part played in the style of a ballad was played by Queen + Paul Rodgers in 2005. The song peaked at number 13 in the UK and was later featured in the movie Highlander.

At the Freddie Mercury Tribute Concert in 1992, Extreme singer Gary Cherone performed the song with the band, having earlier done a medley of other Queen songs with his own group.

The lyrics refer to the Cold War era in which the band members grew up, fuelling the popular conception that the song was about nuclear war [...] The song, however, contains many more references to death and its inevitability [...].

The issue was effectively settled when May wrote on his website that "Hammer to Fall is really about life and death, and being aware of death as being part of life. [...] The Hammer coming down is only a symbol of the Grim Reaper doing his job!!"

en.wikipedia
Here we stand or here we fall
History won’t care at all
Make the bed light the light
Lady mercy won’t be home tonight yeah

What the hell we fighting for?
Just surrender and it won’t hurt at all
You just got time to say your prayers
While your waiting for the hammer to hammer to fall