Stars And Stripes Of Corruption 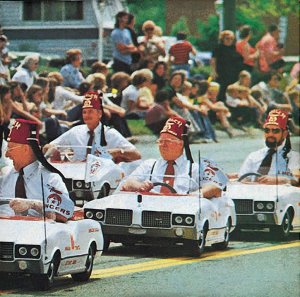 Finally got to Washington in the middle of the night
I couldn't wait
I headed straight for the Capitol Mall
My heart began to pound
Yahoo! It really exists
The American International Pictures logo

I looked up at that Capitol Building
Couldn't help but wonder why
I felt like saying "Hello, old friend"

Of the stars and stripes of corruption
Makes me feel so ashamed
To be an American
When we're too stuck up to learn from our mistakes
Trying to start another Viet Nam
Whilke fiddling while Rome burns at home
The Boss says, "You're laid off. Blame the Japanese"
"America's back," alright
At the game it plays the worst
Strip mining the world like a slave plantation

People we know who should know better
Howl, "America riles. Let's go to war!"
Business scams are what's worth dying for

Are the Soviets our worst enemy?
We're destroying ourselves instead
Who cares about our civil rights
As long as I get paid?

The blind Me-Generation
Doesn't care if life's a lie

so easily used, so proud to enforce

The stars and stripes of corruption
Let's bring it all down!
Tell me who's the real patriots
The Archie Bunker slobs waving flags?
Or the people with the guts to work
For some real change
Rednecks and bombs don't make us strong
We loot the world, yet we can't even feed ourselves
Our real test of strength is caring
Not the toys of war we sell the world
Just carry on, thankful to be farmed like worms
Old glory for a blanket
As you suck on your thumbs

Real freedom scares you
'Cos it means responsibility

So you chicken out and threaten me

Saying, "Love it or leave it"
I'll get beat up if I criticize it
You say you'll fight to the death
To save your worthless flag

If you want a banana republic that bad
Why don't you go move to one
But what can just one of us do?
Against all that money and power
Trying to crush us into roaches?

Let kids learn communication
Instead of schools pushing competition
How about more art and theater instead of sports?

People will always do drugs
Let's legalize them
Crime drops when the mob can't price them
Budget's in the red?
Let's tax religion

Thank you for the toilet paper
But your flag is meaningless to me
Look around, we're all people
Who needs countries anyway?

Our land, I love it too
I think I love it more than you
I care enough to fight

The stars and stripes of corruption
Let's bring it all down!
If we don't try
If we just lie
If we can't find
A way to do it better than this
Who will?