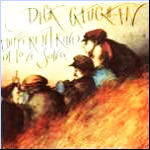 "Written in February 1981 on the railway platform at Friedrichstrasse station which used to be no-man's-land between East and West Berlin. This was during the period when Ronald Reagan and Margaret Thatcher were heightening the Cold War rhetoric in cynical attempts to increase their domestic popularity by John Wayne-esque posturing. I found it quite incredible that most people seemed to think there was absolutely nothing wrong with these lunatics being prepared to risk leading humanity over the edge of the nuclear abyss in order to get themselves re-elected. Sometimes I genuinely do believe that the sane people are all in mental hospitals and the lunatics really are being allowed to run the show.
Inspired by the poem by Yevgeny Yevtushenko, 'Do you think the Russians stand for war?'"
(Dick Gaughan)
Do you think that the Russians want war?
These are the parents of children who died in the last one
Do you think that it’s possible, knowing their past
That they’d ever consider repeating the last
When 20 million were slaughtered by Nazi invasion?
They died fighting on our side, you know,
In a fight to defend humankind
Against Nazi terror and hatred

Do you think that the Russians want war?
They’re the sons and the daughters of parents who died in the last one
Do you think that they’d went to go through that again
The destruction, the bloodshed, the suffering and pain?
In the second world war out of every three dead one was Russian
If we try with all of our power
Can we not find a way
To peacefully settle our difference?

Do you think that the Russians want war?
Will the voice of insanity lead you to total destruction?
Will you stumble to death as though you were blind?
Will you cause the destruction of all humankind?
Will you die because you don’t like their political system?
There will no survivors you know
No one left to scream in the night
And condemn our stupidity