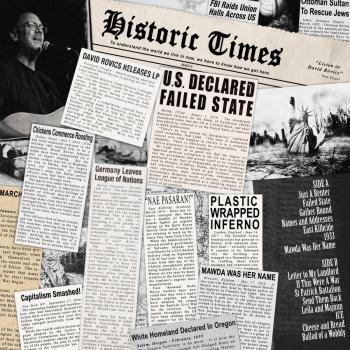 History doesn't repeat, they say, but it often appears it does
Enough so that it seems like we should know just how it was
When in another time and place the party in the driver's seat
The Social Democrats ruled on behalf of the elite
And the next person who arose to lead the state
Said he'd stand up for his people and make his country great

He said everyone's exploiting us, and the reason why
Is we've been ruled by weaklings, and now it's time we must reply
Military spending and industry grew
And the razor wire tent camps did, too
He said we'll take the country back, and standing on the brink
He said it's anarchy or me, we can rise or we can sink

From Budapest to London, from Chicago to Milan
There was the specter of all those so inspired by the man
He signed treaties that were broken before the ink was dry
He left the League of Nations and Prime Ministers would try
Appeasement, but whatever they would do
The fuhrer would just tighten the screws

Most of the news seemed real – at least after a while
The same propaganda, wherever on the dial
Germany was the victim – it would be victim no more
That's what he was saying years before the war
Years before the blitzkrieg, before extermination
Became the fate of so many then living in the nation

He talked of enemies within and enemies outside
Who together had conspired and stolen and lied
He said they took us for a ride with treaties signed by those
Serving foreign interests, as every Aryan knows
But follow me, he said, you won't recognize the place
We'll be great again – we're the Master Race

People look back and wonder what could have been done
Many years before the war was won
When social institutions fell one after the next
And then faster than almost anyone expected
Few people could have even imagined the cost
Once it was too late, and the chance for peace was lost