Pull Out the Pin 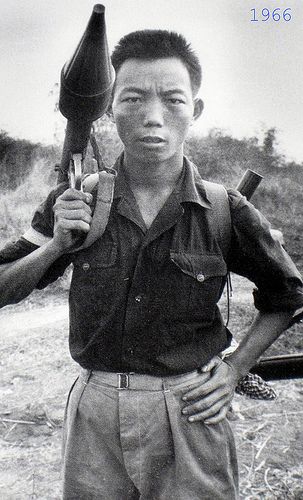 I saw this incredible documentary by this Australian cameraman who went on the front line in Vietnam, filming from the Vietnamese point of view, so it was very biased against the Americans. He said it really changed him, because until you live on their level like that, when it's complete survival, you don't know what it's about. He's never been the same since, because it's so devastating, people dying all the time.
The way he portrayed the Vietnamese was as this really crafted, beautiful race. The Americans were these big, fat, pink, smelly things who the Vietnamese could smell coming for miles because of the tobacco and cologne. It was devastating, because you got the impression that the Americans were so heavy and awkward, and the Vietnamese were so beautiful and all getting wiped out. They wore a little silver Buddha on a chain around their neck and when they went into action they'd pop it into their mouth, so if they died they'd have Buddha on their lips. I wanted to write a song that could somehow convey the whole thing, so we set it in the jungle and had helicopters, crickets and little Balinese frogs.

(Kris Needs, 'Dream Time In The Bush'. Zigzag (UK), November 1982)
Just as we hit the green
I've never been so happy to be alive
Only seven miles behind
You could smell the child
The smell of the front line's survival

You learn to ride the Earth
When you're living on your belly and the enemy is city-birth
Who need radar? We use scent
They stink of the west
Stink of sweat
Stink of Cologne and Baccy and all their yankee hash

I've seen the coat for me
I'll track him 'til he drops, then I'll pop him one he won't see
He's big and pink and not like me
He sees no light, he sees no reason for the fighting

I had not seen his face
'Til I'm only feet away unbeknown to my prey
I look in American eyes
I see little life, see little wife
He strike a violence up in me