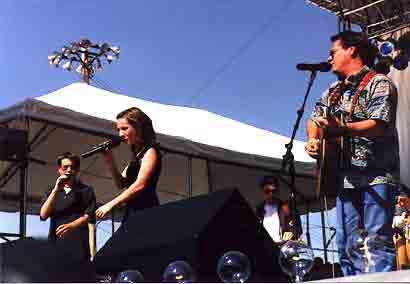 It is the kind of strange coincidence that sounds like a poor joke, but it isn't at all funny to Steve Wilkinson.

He and two of his children, Amanda and Tyler, make up the country music trio The Wilkinsons and today the group is hard at work at a local school on their latest music video "Nobody Died." Focusing on school bullying and violence, the song was inspired by the 1999 Columbine shootings, but it seems all the more ominous in light of Monday's massacre at Virginia Tech.

"The timing flipped me out and it kind of pulled the rug out from under my feet ... I was in my basement finishing off my rec room when my video director called me. He said, `have you seen the news? You're not going to believe it.'
"It's terrible, and it just made me sick," says Steve Wilkinson from his home in Belleville.
"I tell you what, the song has been in our laps for 5 or 6 years. We recorded it once and it never came out because we didn't have the courage to do it."

Wilkinson says they were concerned that radio might not play the song due to its content, but after the Amish school shooting last year that resulted in the deaths of five girls, the group felt it was a necessary message to get out.
He describes the song as a reminiscence from the singer's point of view about what life was like when they went to school and how things have changed.
As a father with children still in school, Wilkinson understands the fear that parents are living with whenever these chilling incidents occur.

"I've got a daughter that's still in high school and I thought about the millions of fathers sending their kids to school these days. Nobody ever thinks that this type of thing would ever occur at any school."

The Wilkinsons released their new album, Home, a little over a month ago, and the band applied for and received a grant to make the "Nobody Died" video.
Casting and plans have been in the works for weeks, Wilkinson says, adding Monday's incident did make them pause, but after speaking with their label and publicists, they decided to push forward.
"I just felt that we finally needed to shine a light on it," he says. "If one radio station and one person listens to it and thinks twice about maybe doing something drastic because they're being picked on or something went wrong in their world, it's worth the money, the time and it's worth the effort."
Back when I went to school
Kids smoked and swore and broke some rules
But I mean didn't everybody
Almost everybody
Fake ID bought a quart of beer
Had the devil's rock n' roll ringing in our ears
And people said these kids got a problem here
Well I'm not saying that they weren't right
I've cried and tried to understand
What I'm seeing on the news tonight
I'll admit that we were young and foolish
Totally irresponsible but

Chorus:
Nobody died
We all made it home
Well we'd fuss and fight and make mistakes
But life went on
There were broken hearts and dreams
And wounded lives
But nobody died

Kids got bullied, picked on and teased
But somehow we found our place
In the scheme of things
And time heals everything
Almost everything
When I look back on the things I've done
Some good, some bad
And I'm really sorry if I hurt anyone
Yeah, I'm really sorry if I hurt anyone
How'd we get from there to here
From Shakespeare and math and science
To shots ringing in our ears
And what's it gonna take to get us back
Get us back to where