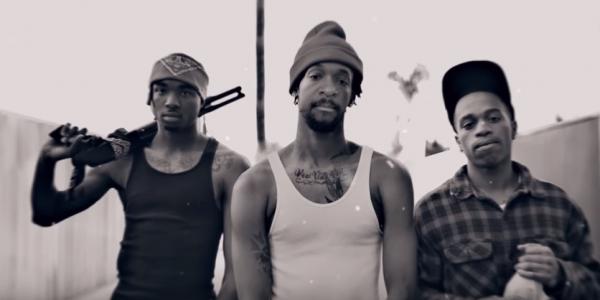 Street livin', caught in the trap
Guns or books, sell crack or rap
Be like kings or be like pawns
They called us coons, now they call us cons
Street niggas be packing pistols
Terrorists be blasting missiles
Crips and Bloods and retail thugs
CIA planes bring Colombian drugs in
Don't push me 'cause I'm close to hell
The teachers in my neighborhood can hardly spell
And compare to them, prison guards get paid well
Ten years no bail is 4 years at Yale
So, forget about the statue of General Lee
Because the status of blacks are generally
Gonna end up in some penitentiary
Systematically, that's how they made it to be
Listen, they derailed the soul train
And put a nightmare in every Martin Luther King
And privatized prisons are owned by the same
Slave masters that owned the slave trade game
And racists no longer have to be racist
'Cause niggas kill more niggas than the KKK did
Now, every time I hear a new def jam
Niggas killing niggas like they Ku Klux Klan
I understand what's a nigga to choose?
Be the killer or be the dead dude in the news
I get it, what's a nigga to do?
No education in the hood got a nigga confused

Street livin', tough conditions
Brainwashed by the television
We lost in the war we live in
Double cross love lost no religion
Street livin', oh my gosh
Another brother got shot by the searg'
Another cop got off with no charge
If you black in the hood, you at large
You're guilty until you prove you're innocent
If you're ivory, they treat you different
If you're ebony, they assume your temperament
Will be vigilant and they call you militant
And you'll get shot and they'll say the incident
Is 'cause you're belligerent, what a coincidence?
Born and bred but you're still an immigrant
And if you ain't dead, you can see imprisonment