Album :POWER IN THE BLOOD 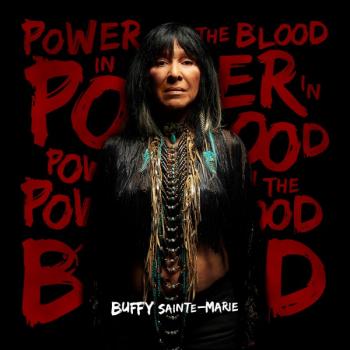 "Title is in the Cree language and it means “I love you, Baby.” I dedicate it to all the generations of Indigenous people who keep Native America alive in our hearts, in our cultures, and in our actions towards our most sacred mother, Nature."
He’s not like a stranger he’s more like a vision you’d seen
The kind of a face that you’d see on the edge of a dream
he was beaded and feathered from his head to his moccasined feet
and now you’re singing
Ke sakihetin awasis
He reminds you of a legend that you had known as a child
He knew it too it was about Earth and about Sun and about Sky
Oh it was about Wolf and Coyote and Eagle and Kitchimanitou*
and Wakontanka**
Ke sakihetin awasis
On some reservation your purification’s begun
It’s the fifth generation the young and the old are as one
Singing come back to the Sweetgrass
come back to the Pipe and the Drum
and be your future.
Ke sakihetin awasis ***
* Kitchimanitou means Great Spirit in Cree
** Wakontanka means Great Spirit in Lakota
*** Ke sakihitin awasis means I love you Baby in Cree.