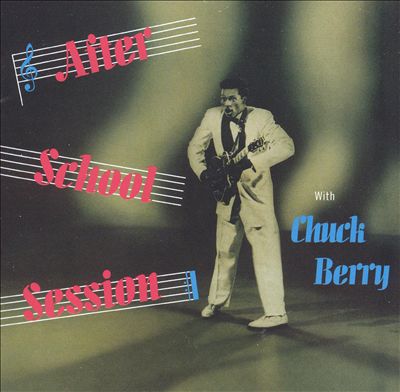 “Up in the mornin’ and out to school / The teacher is teachin’ the golden rule / […] / Hail, hail rock and roll / Deliver me from the days of old”, cantava Chuck Berry vent’anni prima di Another Brick in the Wall dei Pink Floyd…

Ring, ring goes the bell
The cook in the lunch room's ready to sell
You’re lucky if you can find a seat
You’re fortunate if you have time to eat
Back in the classroom, open your books
Keep up the teacher don’t know how mean she looks

Soon as three o’clock rolls around
You finally lay your burden down
Close up your books, get out of your seat
Down the halls and into the street
Up to the corner and round the bend
Right to the juke joint, you go in

Drop the coin right into the slot
You’re gotta hear somethin’ that’s really hot
With the one you love, you’re makin romance
All day long you been wantin’ to dance,
Feeling the music from head to toe
Round and round and round you go

“[…] This songs works on a number of different levels, all complementary. First, it offers a slice of American teenage life in the late fifties. A wealth of detailed observation serves the song well in this regard — the sharp glimpses of the school day, the movement “down the halls and into the street,” the local juke joint where you could select your favorite tunes and dance to them with your best girl — all these and more are carefully depicted.

The song also works as a direct expression of rock’s grand theme of liberation. The first two verses describe the oppression of the school day: being subject to authority, working hard at the study of subjects that seem to have no intrinsic interest, the regimented schedule of classes with no more than a brief interlude for lunch, the competition with the jostling crowd at the school.

The next two verses offer release from all these constraints. “Soon as three o’clock rolls around, you finally lay your burden down.” The scene at the juke joint is joyful and energetic, in stark contrast to the school day. In particular, there is contrast between the rigid structure of the school routine, and the emotional freedom offered by the rock music and its associated environment: hearing something “really hot,” “feeling the music from head to toe,” and making romance with the one you love.

Finally, the song pays direct homage to rock music as a liberating force, saying that, by being “loud and bold,” the music can “deliver us from the days of old.” And what are we being liberated to? “The feeling is there, body and soul.”

So we can see that this brief rock song encapsulates the mission of rock music as a liberating force, freeing a generation from a value system that places structure, discipline and rote learning at the top of its pyramid, and releasing it to a new world dominated by passion and feeling. Put another way, the movement is from an experience based primarily on the “head,” to a “whole body” experience that includes the heart and soul, as well as the mind. […]”

(Herb Bowie in Reason to Rock)