Lyrics by Daniel Decker
Music by Ara Gevorgian (or Gevorkyan) 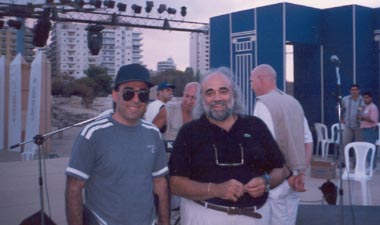 
From a message personally sent by Daniel Decker to the forum of armeniangenocide.com (from which also lyrics are reproduced).

I was doing a search online and discovered this forum. As the author of the lyrics and singer of Adana, I really appreciate your kind words about the song. Though I am not Armenian by birth, the words have a special meaning for me.

As a Christian, the fact of the genocide affects me deeply. During my many visits to Armenia, I have come to love the Armenian people and their rich heritage, as well as their vibrant culture. One of the most significant moments of my life occured on April 23, 2005, when I sang "Adana" in Yerevan for the very first time to commemorate the 90th anniversary of the genocide. I will never forget singing "Adana" as I looked into the eyes of the relatives of so many who lost their lives. That evening, "Adana" was presented again at the genocide memorial in Yerevan.

Perhaps to some, this is just a song. To me, it is a reminder of a great tragedy that must NEVER be repeated. I DO hope that these lyrics will bring a small measure of healing to Armenian families who continue to feel the pain of the genocide.

By the way, here are the complete English lyrics exactly as they were recorded.

Adana, 1915. Armenian children dying in the street.
American composer and singer Daniel Decker has achieved critical acclaim for his collaborations with Armenian composer Ara Gevorgian. The song "Adana", named after the city where one of the first massacres of the Armenian people took place, tells the story of the Armenian Genocide. Decker wrote the song's lyrics to complement the music of Ara Gevorgian. Cross Rhythms, Europe's leading religious magazine and web portal said of "Adana", "seldom has a disaster of untold suffering produced such a magnificent piece of art." He was officially invited by the Armenian government to sing "Adana" at a special concert in Yerevan, Armenia on April 24 2005 to commemorate the 90th Anniversary of the Armenian Genocide. To date, "Adana" has been translated into 17 languages and recorded by singers around the world. (From en.wikipedia)

A music video "Adana" has been posted on Youtube, as well as an interview with Daniel Decker talking about why he wrote "Adana".

HERE IS THE LINK.
NARRATION:
In the city of Adana during the darkest days of the Ottoman Empire, there began a tragedy that marked the start of what was to become known as the Armenian Genocide. The people of Armenia were forced into starvation, torture and extermination. Armenian homes were burned to the ground as men, women and children were killed. Sometimes entire families were wiped out. They were accused, convicted and sentenced to die because they dared to call themselves "Christians", their crime was in believing in a God who sent His son, Jesus Christ, to die for their sins. By 1915 1.5 million Armenians were ruthlessly slaughtered, because they would not renounce their faith in Christ. Unpunished and undeterred the ones responsible for the massacre in Adana set stage for the terrible genocide of the Armenian people. This is their story.

From the morning sun till the day was done
Fathers worked until their strength was gone,
In the summer air under mother's care
Children played within the village square.
Through the soil and sand, farmers worked the land
Gathering what they grew by their own hand,
Living day by day, trying to make their way
Unaware the price they would soon pay.

Keepers of the sword, marched in one accord
Striking down the weak, without a single word
Ruthlessly they came, with one deadly aim
Kill all who believed in Jesus' name.
In the shroud of night, families took their flight
Unprotected by the soldier's might,
Hungry and alone, starved to skin and bone
Forced to sleep on pillows made of stone.
Wandering in the rain, trembling from the pain
Cries for mercy offered up in vain,
Naked and afraid, on their knees they prayed
As they knelt before the warrior's blade... singing.

To the great I AM, Worthy is the Lamb
To Him who sits upon the throne we bow before You,
Holy is the One, God's Almighty Son
Glory to the Christ, Our risen King.

NARRATION:
Though persecuted, they were not abandoned. As they laid down their earthly lives, they would gain eternity with Christ. Though the world may forget, God would remember their suffering. Never again would they hunger or thirst. For the Son of God, Jesus Christ, who died and rose again, would be their shepherd. He would lead them to the springs of living water and God would wipe away every tear for their eyes. They would encircle the throne of God singing to the great I Am, worthy is the Lamb, who was and is, and is to come.

To the great I AM, Worthy is the Lamb
Who was and is, and is to come.
Holy is the One, God's Almighty Son
Glory to the Christ, Our risen King.