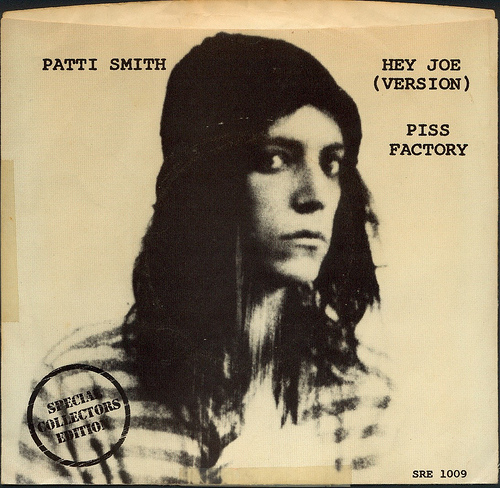 
‎“'Piss Factory' was written in reaction . . . Where I was brought up in South ‎Jersey, there wasn't much work. In terms of getting a job, you either worked at the glass factory or ‎you went to this other factory -- that I wound up in -- where you made mattresses or children's ‎buggies. It was non-union, so you had really low pay; the conditions were terrible and, it was, so I ‎perceived, a really rotten way to live. But most of the people who worked in this factory had ‎worked there all their lives. I only worked there for two summers, but in that small glimpse I had of ‎what some people considered a life, it was a real prison. I was at a time in my life when there was ‎really no way out: my parents had no money, and while I'm not speaking against the local ‎community, it wasn't a very culturally developed area. People were happy just to have this crappy ‎job and live under the worst conditions -- and that probably produced the most rebellion in me. ‎

But in 'Piss Factory' I wasn't trying to represent any punk-rock point of view. I was just representing ‎the fact that we all have a choice. I perceived I would rather live on the subways and sleep on the ‎streets of New York and try to find something better to do with my life, than choose living in a ‎cheap little place -- trying to divide my pennies between a little bit of food and a little bit of ‎clothing. Working in this hot, sweaty, shitty factory -- to me it was all a matter of choice and ‎imagination. It felt like a lot of people were happy to be like cattle in the factory, and never rebel ‎against the fact that it was 110 degrees and there were no windows. It was unhealthy, they were ‎being paid minimum wage, they just sort of went along with it. So 'Piss Factory' wasn't anything to ‎do with punk rock. I mean, what is punk rock, anyway? Is it like, I'm writing something just to ‎make a bunch of people with weird hair happy? I wrote that because I was concerned about the ‎common man, and I was trying to remind them they had a choice.”‎

(Bartleby)
Sixteen and time to pay off
I got this job in a piss factory inspecting pipe
Forty hours thirty-six dollars a week
But it's a paycheck, Jack.
It's so hot in here, hot like Sahara
You could faint in the heat
But these bitches are just too lame to understand
Too goddamned grateful to get this job
To know they're getting screwed up the ass
All these women they got no teeth or gum or cranium
And the way they suck hot sausage
But me well I wasn't sayin' too much neither
I was moral school girl hard-working asshole
I figured I was speedo motorcycle
I had to earn my dough, had to earn my dough
But no you gotta, you gotta [relate, babe,]
You gotta find the rhythm within
Floor boss slides up to me and he says
‎"Hey sister, you just movin' too fast,
You screwin' up the quota,
You doin' your piece work too fast,
Now you get off your mustang sally
You ain't goin' nowhere, you ain't goin' nowhere."
I lay back. I get my nerve up. I take a swig of Romilar
And walk up to hot shit Dot Hook and I say
‎"Hey, hey sister it don't matter whether I do labor fast or slow,
There's always more labor after."
She's real Catholic, see. She fingers her cross and she says
‎"There's one reason. There's one reason.
You do it my way or I push your face in.
We knee you in the john if you don't get off your get off your mustang Sally,
If you don't shake it up baby." Shake it up, baby. Twist & shout"
Oh that I could will a radio here. James Brown singing
‎"I Lost Someone" or the Jesters and the Paragons
And Georgie Woods the guy with the goods and Guided Missiles ...
But no, I got nothin', no diversion, no window,
Nothing here but a porthole in the plaster, in the plaster,
Where I look down, look at sweet Theresa's convent
All those nurses, all those nuns scattin' 'round
With their bloom hoods like cats in mourning.
Oh to me they, you know, to me they look pretty damn free down there
Down there not having crystal smooth
Not having to smooth those hands against hot steel
Not having to worry about the [inspeed] the dogma the [inspeed] of labor
They look pretty damn free down there,
And the way they smell, the way they smell
And here I gotta be up here smellin' Dot Hook's midwife sweat
I would rather smell the way boys smell--
Oh those schoolboys the way their legs flap under the desks in study hall
That odor rising roses and ammonia
And way their dicks droop like lilacs
Or the way they smell that forbidden acrid smell
But no I got, I got pink clammy lady in my nostril
Her against the wheel me against the wheel
Oh slow motion inspection is drivin' me insane
In steel next to Dot Hook -- oh we may look the same--
Shoulder to shoulder sweatin' 110 degrees
But I will never faint, I will never faint
They laugh and they expect me to faint but I will never faint
I refuse to lose, I refuse to fall down
Because you see it's the monotony that's got to me
Every afternoon like the last one
Every afternoon like a rerun next to Dot Hook
And yeah we look the same
Both pumpin' steel, both sweatin'
But you know she got nothin' to hide
And I got something to hide here called desire
I got something to hide here called desire
And I will get out of here--
You know the fiery potion is just about to come
In my nose is the taste of sugar
And I got nothin' to hide here save desire
And I'm gonna go, I'm gonna get out of here
I'm gonna get out of here, I'm gonna get on that train,
I'm gonna go on that train and go to New York City
I'm gonna be somebody, I'm gonna get on that train, go to New York City,
I'm gonna be so bad I'm gonna be a big star and I will never return,
Never return, no, never return, to burn out in this piss factory
And I will travel light.
Oh, watch me now.‎