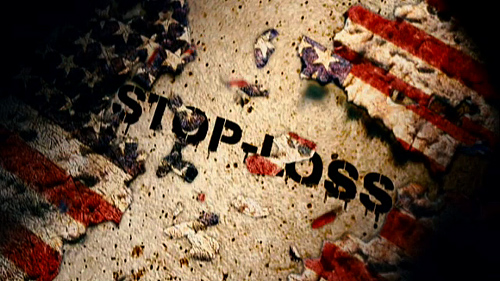 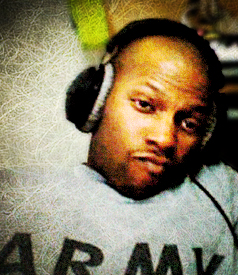 
Army Specialist (Spc) and Iraq war veteran Marc Hall was incarcerated by the US Army on December 11, 2009, in Liberty County Jail, Georgia, for recording a song that expresses his anger over the Army’s "Stop-Loss" policy.
Marc flew out of Hunter Army Airfield, with a stop in Spain today, before arriving in Balad, Iraq. He is expected to be transported to Camp Arifjan, Kuwait for continued pre-trial confinement. The Army has made it clear that Marc will face a General Courts Martial that could result in years in prison and a dishonorable discharge. Eleven violations of Article 132 are now being cited going into the Article 32 (pre-trial) hearing. While we had all hoped to be able to stop this 'extradition', hopefully this underscores the seriousness of the situation and will serve to "jump start" our efforts. We have a lot of work to do if we are going to free Marc.
Jailed hip-hop soldier Spc Marc Hall unsuccessfully petitioned the Southern Georgia federal court Monday, and then the 11th Circuit Court of Appeals today, to stop the Army from sending him to Iraq for a secret court martial over his angry "Stop-loss" song. Marc had simply asked for a public Fort Stewart trial. The Army is now free to send Marc to Iraq in shackles as early as this evening. We have just begun to organize in Marc's defense, and we will not stop until he is free.
Also: "Army soldier jailed for rap lyrics to face court-martial in Iraq"
By Dahr Jamail, Truthout.org. February 18, 2010

FORT STEWART, GEORGIA (February 16, 2010)– Attorneys for jailed hip-hop soldier Spc Marc Hall filed a petition with the US District Court of the Southern District of Georgia yesterday in an attempt to stop the Army from transferring Spc Hall to Iraq for court martial. Spc Hall currently remains incarcerated in the Liberty County Jail, Hinesville, Georgia as of this morning.
David Gespass, civilian attorney for Spc Hall explained, “Not just the Constitution, but the rules for courts-martial, prohibit prosecutors from holding a court-martial in a combat zone as a pretext for depriving an accused of a public trial, counsel of his choice and necessary witnesses. Whatever the Army may claim, that is exactly what the Army is doing to Marc.” Mr. Gespass is the president of the National Lawyers Guild. He is based in Birmingham, Alabama.
“[Spc Hall] alleges violation of his Sixth Amendment right to a public trial, as well as the First Amendment right of the public and media to attend the trial and report on it. He has alleged violation of his Sixth Amendment right to counsel of his choice and of the right to call witnesses in his favor…” summarizes the brief filed in federal court.
“Among the numerous issues of significant public debate involved in Spc Hall’s case include: The military’s “Stop-loss” program, the limits on artistic expression by Soldiers, the treatment of Soldiers with post traumatic stress disorder (PTSD) while on active duty, and opposition to the continuing Iraq occupation from within the military. We are concerned that the Army appears to be planning to conduct the court martial in virtual secrecy,” declared Jeff Paterson in a supporting exhibit filed with the court. Mr. Paterson is the project director of Courage to Resist (couragetoresist.org), an Oakland, California-based organization dedicated to supporting military objectors. Spc Hall is also a member of Iraq Veterans Against the War (ivaw.org), another organization working to provide legal, moral, and political support for Spc Hall and his family.
Spc Marc Hall produced and distributed an angry hip-hop song in July 2009 when he discovered that he would not be allowed to leave active duty due to the Army’s “Stop-Loss” policy. Spc Hall continued to serve with his unit for the next four months undergoing command and mental health counseling as requested. “I explained to [my first sergeant] that the hardcore rap song was a free expression of how people feel about the Army and its Stop-Loss policy. I explained that the song was neither a physical threat nor any threat whatsoever. I told him it was just hip-hop”, explained Spc Hall.
When Spc Hall continued to express strong objections to redeploying to Iraq, his unit used the hip-hop song as a pretext to incarcerate Spc Hall on Dec. 12, 2009. The command likely believed Spc Hall would refuse to deploy anyway creating discomfort among other soldiers.
Spc Hall was charged Dec. 17, 2009, with five specifications in violation of Article 134 of the Uniform Code of Military Conduct, two of those for wrongfully communicating a threat based on song lyrics. Article 134 is the vague rule that outlaws anything “to the prejudice of good order and discipline.”
On Feb. 1, 2010 Spc Hall underscored his non-violent outlook by formally applying for discharge from the Army as a conscientious objector. His application explains the transformation he went through during his year-long deployment to Iraq. The Army’s attempts to now deploy him violate AR 600-8-105 (Military Orders) and the Army's Conscientious Objector regulations.
On Feb. 3, 2010 Fort Stewart, Georgia officials confirmed that the Army would transfer Spc Hall to Iraq for court martial "within a few days." The Army's press release stated, “The jurisdiction transfer ensures a full and fair trial for both Spc Hall and the United States.” Nothing could be farther from the truth, at least for Spc Hall as detailed by yesterday's petition.
The Army continues to implement its Stop-Loss policy despite president Obama’s promise to end the unfair practice that involuntarily extends the active duty service term of many soldiers. According to the Pentagon 120,000 soldiers have been affected by Stop-Loss since 2001 and 13,000 are currently serving under Stop-Loss orders..

GI resister Marc Hall is now a free man. Under pressure from his supporters, the U.S. Army has backed down from their plans to give him a kangaroo court martial in Iraq. Instead they have granted him a discharge. Marc Hall is known as the GI "rapper" who recorded a song against the Army's "Stop-Loss" policy last July. But his real troubles began in December when he filed a formal complaint with the Army's Inspector General about the poor quality of the Army's evaluation and treatment of his PTSD. Five days later, the Army arrested the Iraq veteran and charged him with 11 counts of violating the good order of the Army (Article 134), including "threatening violence against fellow soldiers."

The GI resister support group Courage To Resist found him a lawyer near his base, Fort Stewart, Georgia, and the Army sent him 8,000 miles away to a prison in Kuwait. Marc's mother worked with Courage To Resist and members of VFP and IVAW to form the Family and Friends of Marc Hall, which rallied political support and raised funds to send a lawyer and doctor to the Middle East.

The presiding military officer at Marc Hall's arraignment (Article 32 hearing), threw out 5 of the 11 charges against Hall, finding them totally without basis or evidence to support them. She recommended that Spc Hall be given a Special Court Martial, which can give a maximum sentence of 1 year in prison and a Bad Conduct Discharge. But the Army command, clearly wanting to make an example of Marc Hall, insisted it would give him a General Court Martial. Marc Hall was facing a sentence of up to 6 years in prison and a Dishonorable Discharge. Finally, though, the Army appears to have come to its senses.

Veterans For Peace played a significant role in supporting Marc Hall. When VFP called for emails to be sent to the Army on behalf of Spc Hall, 643 members of VFP did so. One hundred and ten VFP members forwarded the action alert to friends, and 113 contacted newspapers on behalf of Hall. Iraq Veterans Against the War also mobilized its members in support of Marc Hall.

VFP members Russell Brown, of Buffalo, New York, and Gerry Condon, of Seattle, Washington, participated in weekly strategy sessions of the Family and Friends of Marc Hall, along with Jeff Paterson, a VFP member who heads up Courage To Resist. Courage To Resist raised and spent $7,100 for Marc Hall's defense fund, and has another $1,500 of outstanding expenses at this time.

Marc Hall's lawyer, David Gespass, who is president of the National Lawyers Guild, will now work to get Hall's Other Than Honorable discharge upgraded, and to insure that Hall, who saw 14 months of combat in Iraq, will get treatment for his PTSD from the Veterans Administration.

Veterans For Peace has supported GI resisters for several years, and will soon be launching a GI Resistance Working Group, in order to provide timely information to VFP members about how they can support GI resisters in their time of need.
See "Courage To Resist" by Vic Sadot's Crazy Planet Band.

And here are the accused song lyrics!
Oh gee, I did a good thing
I'm back from Iraq, I served my country
The only thing on my mind right now
Is to get down and serve big time with family
But a house man rockin' the fruits of my labor
That 14 months of Iraq behavior
And it hurts staying alive
Shoot that fucking paper no doubt
I was making that Iraq paper?
Now I'm ready -to get on out
Become a civilian again
And get on out
No car payments, house all decked out
So I'm set too motherfuckers to scream and shout
But success got costs
The army got force
Telling me, a nigga like me to Stop Loss
That means I can't get out
My salad got tossed
They fucked me over like a mob boss, high horse..

It looks like the Army wants a war
They wanna fuck with a force they never felt before
You can't stop the unstoppable
That's what's in store
So in fighting for the greatest cause
Where there's a will there's a way
So don't tell me: Hey that's life, motherfucker
cause you can't get sprayed?
What against behave
Now this is real days
When shit hit the airwaves
Somebody gotta say:
Fuck you colonels, captains, E-7s and above
Think you're so much bigger than I am
I've been too good of an American
Stop-lossed, Stop movement, Got me chasing
If I do drugs, I'll get kicked out,
But if my time is out
I can't get out
So the good die young
I heard it out your mouth
So fuck the Army
And everything you're all about..

Like Obama says: "Somebody be held responsible"
But some of y'all gonna be held in the hospitals
whenever possible..
To pursue my own journeys in life,
through my own main obstacles
Since I can't pinpoint the culpabley.
They want me cause misery loves company
I'm gonna round them all up
Eventually, easily,
walk right up peacefully
And surprise them all
Yes, yes ya'll
up against the wall
Turn around,
I gotta a motherfucking magazine with thirty rounds
On a three round burst, ready to fire down
Still against the wall
I grab my M-4
Spray and watch all the bodies hit the floor
I bet your never stop loss nobody no more
In your next lifetime of course, no remorse..

Gee.. You don't stop till the Army is the only military branch
That still got the stop loss in effect...
So the only thing I got to say
Is prepare for the consequences
When people want to get out,
let them get out.!