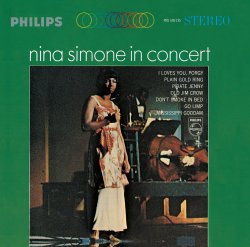 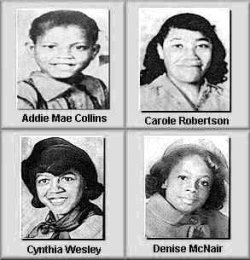 Le quattro vittime The four victims.
Mississippi Goddam is a song written and performed by United States singer and pianist Nina Simone. It was first released on her album Nina Simone in Concert which was based on recordings of three concerts she gave at Carnegie Hall in 1964. The album was her first release for the Dutch label Philips Records and is indicative of the more political turn her (recorded) music took during this period. The song was released as a single and boycotted in several Southern states, allegedly because of the word 'goddam' in the title. Together with "Four Women" and "To Be Young, Gifted and Black" it is one of her most famous protest songs and self-written compositions.

The song is her response to the murder of Medgar Evers and the bombing of a church in Birmingham, Alabama, killing four black children. On the recording she cynically announces the song as "a show tune, but the show hasn't been written for it yet." The song begins jauntily, with a show tune feel, but demonstrates its political focus early on with its refrain "Alabama's got me so upset, Tennessee's made me lose my rest, and everybody knows about Mississippi goddam." In the song she rails on the common argument at the time that civil rights activists and African Americans should "go slow" and make changes in the United States incrementally: "Keep on sayin' 'go slow'...to do things gradually would bring more tragedy. Why don't you see it? Why don't you feel it? I don't know, I don't know. You don't have to live next to me, just give me my equality!"

She performed the song in front of 40,000 people at the end of one of the Selma to Montgomery marches when she and other black activists, including Sammy Davis Jr., James Baldwin and Harry Belafonte crossed police lines.

This is a show tune
But the show hasn’t been written for it, yet

Don’t tell me
I tell you
Me and my people just about due
I’ve been there so I know
They keep on saying go slow!

I made you thought I was kiddin’ didn’t we

Oh but this whole country is full of lies
You’re all gonna die and die like flies
I don’t trust you any more
You keep on saying go slow!
Go slow!