Black Steel In The Hour of Chaos

[1989]
Ridenhour-Shocklee-"Vietnam" Sadler-Drayton
First released as a single
Prima uscita come single
Album: It Takes A Nation Of Millions To Hold Us Back 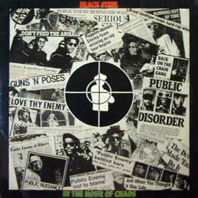 "Black Steel in the Hour of Chaos" is a song by the American hip hop group Public Enemy from their second album, It Takes a Nation of Millions to Hold Us Back. The song is built on a high-pitched piano sample from the Isaac Hayes song "Hyperbolicsyllabicseequedalymystic" from the album Hot Buttered Soul and tells the story of prison escape.

The vocals are done mostly by lead Public Enemy rapper Chuck D, with sidekick Flavor Flav appearing in between verses, seemingly speaking to Chuck over the phone. Flavor went to another room and did actually call the studio to achieve this effect.

The lyrics deal with a fictional story surrounding the Vietnam war. Chuck has been drafted ("I got a letter from the government, the other day / I opened and read it, it said they were suckers / they wanted me for their army or whatever"); however, he refuses to become part of the army ("I said 'never!'"). The main idea behind this is that the war is wrong, with a hint of pure indignation towards the treatment of Black people by American society ("here's a land that never gave a damn about a brother like me"). This serves to both criticize war, racism and the prison system ("Four of us packed in a cell like slaves").

Chuck is then taken to prison, from which he attempts to escape. "Black Steel" is a reference to a gun, which he needs to escape. By the end of the second verse, Chuck has taken a gun from a C.O. (corrections officer) who was "fallin' asleep."

With gun in hand, Chuck and the other prisoners escape "to the ghetto - no sell out." Chuck then comments on how there are 6 C.O.s who he "ought to put their head out." He does not, at first, but after a female tries to thwart the escape she is shot, ("Got a woman C.O. to call me a 'copter / She tried to get away, and I popped her"), presumably dead ("I had 6 C.O.s, now it's 5 to go").

The final verse ends with Chuck and the rest of the prisoners on their final escape. They are confronted with shots and there is a state of chaos. Chuck makes a comment about prison and racism ("This is what I mean—an anti-nigger machine"), which later became the basis for another Public Enemy song, "Anti-Nigger Machine" (featured on the 1990 album, Fear of a Black Planet). Finally, the S1Ws come to the rescue. The song ends with the line "53 brothers on the run, and we are gone" indicating a successful prison escape. (However, in the video for the song, this line accompanies the image of Chuck D being hanged by the triumphant warden of the prison.)

The song features a slower, more melodic beat in comparison to other songs from It Takes a Nation of Millions to Hold Us Back but still remains highly chaotic. Aside from the aftermentioned Hayes sample, the song samples "Little Green Apples" by The Escorts and "Living for the City" by Stevie Wonder.

* This song has been covered by the Brazilian metal band Sepultura.
* It has been performed live on separate occasions with Chuck D on vocals by Asian Dub Foundation and Rage Against the Machine.
* Tricky covered the song, changing its name to "Black Steel", on his debut album Maxinquaye released in 1995. The stripped down rap sound of the original (which includes samples of Isaac Hayes & Stevie Wonder) is replaced by pounding drums & guitars. Martina Topley Bird sings the lyrics instead of rapping. [1]
* The same Isaac Hayes sample is used by The Game in the Just Blaze produced song "Remedy" on the album Doctor's Advocate. Chuck D's line "they got me in a cell" from "Black Steel" is also scratched in the hook.
* The beginning of the song is sampled heavily in the song "Make Some Noise" by "Dougal & Gammer". - en-wikipedia
I got a letter from the government
The other day
I opened and read it
It said they were suckers
They wanted me for their army or whatever
Picture me given' a damn - I said never
Here is a land that never gave a damn
About a brother like me and myself
Because they never did
I wasn't wit' it, but just that very minute...
It occured to me
The suckers had authority
Cold sweatin' as I dwell in my cell
How long has it been?
They got me sittin' in the state pen
I gotta get out - but that thought was thought before
I contemplated a plan on the cell floor
I'm not a fugitive on the run
But a brother like me begun - to be another one
Public enemy servin' time - they drew the line y'all
To criticize me some crime - never the less
They could not understand that I'm a Black man
And I could never be a veteran
On the strength, the situation's unreal
I got a raw deal, so I'm goin' for the steel

They got me rottin' in the time that I'm servin'
Tellin' you what happened the same time they're throwin'
4 of us packed in a cell like slaves - oh well
The same motherfucker got us livin' is his hell
You have to realize - what its a form of slavery
Organized under a swarm of devils
Straight up - word'em up on the level
The reasons are several, most of them federal
Here is my plan anyway and I say
I got gusto, but only some I can trust - yo
Some do a bid from 1 to 10
And I never did, and plus I never been
I'm on a tier where no tears should ever fall
Cell block and locked - I never clock it y'all
'Cause time and time again time
They got me servin' to those and to them
I'm not a citizen
But ever when I catch a C-O
Sleepin' on the job - my plan is on go-ahead
On the strength, I'ma tell you the deal
I got nothin' to lose
'Cause I'm goin' for the steel

You know I caught a C-O
Fallin' asleep on death row
I grabbed his gun - then he did what I said so
And everyman's got served
Along with the time they served
Decency was deserved
To understand my demands
I gave a warnin' - I wanted the governor, y'all
And plus the warden to know
That I was innocent -
Because I'm militant
Posing a threat, you bet it's fuckin' up the government
My plan said I had to get out and break north
Just like with Oliver's neck
I had to get off - my boys had the feds in check
They couldn't do nuthin'
We had a force to instigate a prison riot
This is what it takes for peace
So I just took the piece
Black for Black inside time to cut the leash
Freedom to get out - to the ghetto - no sell out
6 C-Os we got we ought to put their head out
But I'll give 'em a chance, cause I'm civilized
As for the rest of the world, they can't realize
A cell is hell - I'm a rebel so I rebel
Between bars, got me thinkin' like an animal
Got a woman C-O to call me a copter
She tried to get away, and I popped her
Twice, right
Now who wanna get nice?
I had 6 C-Os, now it's 5 to go
And I'm serious - call me delirious
But I'm still a captive
I gotta rap this
Time to break as time grows intense
I got the steel in my right hand
Now I'm lookin' for the fence

I ventured into the courtyard
Followed by 52 brothers
Bruised, battered, and scarred but hard
Goin' out with a bang
Ready to bang out
But power from the sky
And from the tower shots rang out
A high number of dose - yes
And some came close
Figure I trigger my steel
Stand and hold my post
This is what I mean - an anti-nigger machine
If I come out alive and then they won't - come clean
And then I threw up my steel bullets - flew up
Blew up, who shot...
What, who, the bazooka was who
And to my rescue, it was the S1Ws
Secured my getaway, so I just gotaway
The joint broke, from the black smoke
Then they saw it was rougher thatn the average bluffer
'Cause the steel was black, the attitude exact
Now the chase is on tellin' you to c'mon
53 brothers on the run, and we are gone