The Free and Equal Blues 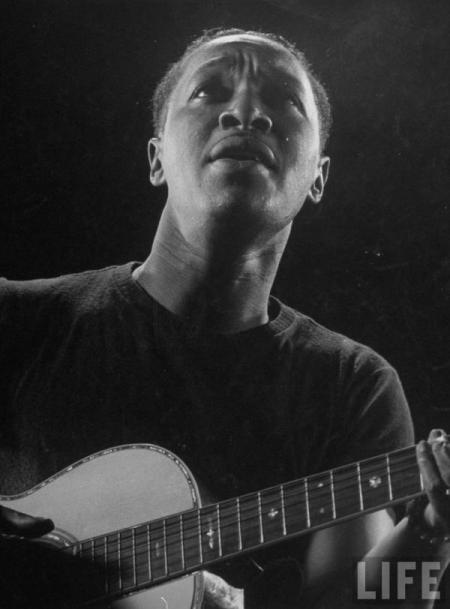 
“Una molecola è una molecola, figlio mio, ed è dannatamente certo che una molecola non ha razza”
I went down to that St. James Infirmary, and I saw some plasma there,
I ups and asks the doctor man, "Say was the donor dark or fair?"
The doctor laughed a great big laugh, and he puffed it right in my face,
He said, "A molecule is a molecule, son, and the damn thing has no race."

"You mean you heard that doc declare
That the plasma in that test tube there could be
White man, black man, yellow man, red?"
"That’s just what that doctor said."
The doc put down his doctor book and gave me a very scientific look
And he spoke out plain and clear and rational,
He said, "Metabolism is international."
Chorus

Then the doc rigged up his microscope with some Berlin blue blood,
And, by gosh, it was the same as Chun King, Quebechef, Chattanooga, Timbuktoo blood
Why, those men who think they’re noble
Don’t even know that the corpuscle is global
Trying to disunite us with their racial supremacy,
And flying in the face of old man chemistry,
Taking all the facts and trying to twist ëem,
But you can’t overthrow the circulatory system.
Chorus

So I stayed at that St. James Infirmary.
(I couldn’t leave that place, it was too interesting)
But I said to the doctor, "Give me some more of that scientific talk talk," and he did:
He said, "Melt yourself down into a crucible
Pour yourself out into a test tube and what have you got?
Thirty-five hundred cubic feet of gas,
The same for the upper and lower class."
Well, I let that pass . . .
"Carbon, 22 pounds, 10 ounces"
"You mean that goes for princes, dukeses and countses?"
"Whatever you are, that’s what the amounts is:
Carbon, 22 pounds, 10 ounces; iron, 57 grains."
Not enough to keep a man in chains.
"50 ounces of phosophorus, that’s whether you’re poor or prosperous."
"Say buddy, can you spare a match?"
"Sugar, 60 ordinary lumps, free and equal rations for all nations.
Then you take 20 teaspoons of sodium chloride (that’s salt), and you add 38
quarts of H2O (that’s water), mix two ounces of lime, a pinch of chloride of
potash, a drop of magnesium, a bit of sulfur, and a soupáon of hydrochloric
acid, and you stir it all up, and what are you?"
"You’re a walking drugstore."
"It’s an international, metabolistic cartel."

And that was news, yes that was news,
So listen, you African and Indian and Mexican, Mongolian, Tyrolean and Tartar,
The doctor’s right behind the Atlantic Charter.
The doc’s behind the new brotherhood of man,
As prescribed at San Francisco and Yalta, Dumbarton Oaks, and at Potsdam:
Every man, everywhere is the same, when he’s got his skin off.
And that’s news, yes that’s news,
That’s the free and equal blues!