All These Things That I've Done 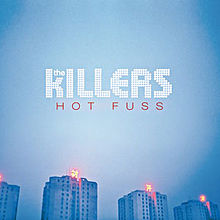 This song appears on the Killers’ debut album "Hot Fuss". It was released as the third single in 2004 in the U.K. and as the fourth single in the States. The single peaked at 74 on the Billboard Hot 100 and at 18 in the UK Singles Chart. It was the only song the band performed at Live 8. The song features an extended refrain of "I got soul, but I'm not a soldier", a phrase now associated with it: Robbie Williams incorporated this refrain into his own performance. Coldplay and U2 followed suit and, at their separate concerts played in Las Vegas, with The Killers in the crowd, incorporated the line into their songs "God Put a Smile upon Your Face" and "Beautiful Day", respectively.
It was featured in the closing credits of the 2005 film The Matador, as well as the 2007 movie Southland Tales as a crucial part of the storyline in which Pilot Abilene (played by Justin Timberlake) lip-synchs it. Also mentioned in the graphic novel preceding the film, Southland Tales: The Prequel Saga. It also played over the opening of the pilot of the television series Jericho. …It is heard at the end of the 2008 Ben Stein film Expelled: No Intelligence Allowed. While the band did give permission for the song to be used, they only did so because they were misled about the intent of the movie. They later sought to have the song removed from the film, but it was too late.

The song plays in virtually its entirety over the first segment of the first episode of the 2008 PBS documentary series Carrier. Nike used the song in a commercial for the 2008 Summer Olympics. Following this Nike ad, the song rose as high as #38 on iTunes. It is played at the Bell Centre in Montreal before every Montreal Canadians home game. It was used at the end of the 2009 U.S. Open tennis tournament to show the tournament's highlights.
Comedian Bill Bailey made reference to the lyrics "I got soul, but I'm not a soldier" in his Tinselworm Live DVD, mentioning that they were meaningless and might as well be "I got ham, but I'm not a hamster."
In October 2009, a band formed by War Child charity called The Young Soul Rebels (which includes musicians such as N-Dubz, Pixie Lott, Kid British, Tinchy Stryder and more) released "I Got Soul", which is a cover of "All These Things That I've Done".
Season 8 American Idol winner Kris Allen performed this on the Idol Tour as part of his set--a last-minute replacement for the coronation song, "No Boundaries".

I wanna stand up, I wanna let go
You know, you know - no you don't, you don't
I wanna shine on in the hearts of men
I want a meaning from the back of my broken hand

Another head aches, another heart breaks
I am so much older than I can take
And my affection, well it comes and goes
I need direction to perfection, no no no no

And when there's nowhere else to run
Is there room for one more son
These changes ain't changing me
The cold-hearted boy I used to be.