[2002]
"Five years of war, and no end in sight. This is a remix of 'Peace Love Rise Above' originally recorded in 2002 before the occupation." 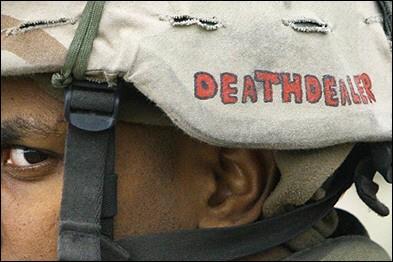 Invasion! Waiving the flag of our nation
But I don't pledge allegiance to this murderous malfeasance
Is this World War 3?
Is this a new world order?
Brought to our living rooms by embedded reporters?
But I'm not there so I'm gonna take it to the streets
Because dissent and discourse are very vital to democracy
I wrote to the President,
I wrote my Congressman
They sent me back a nice letter "They'll consider my opinion"
So which is more powerful
votes from a voter
or billions of dollars
in the accounts of stockholders?
Halliburton profits from the oil conflagrations
While the White House just says "Fuck United Nations!"


First we drop some propaganda and then we drop bombs
Then we drop food rations I think something is wrong
And I think that we should just drop the program
This ain't about Iraqi freedom this is "disarm or death camp"
Atrocities depicted but nobody is convicted
because the new world order wicked wealthy power is addictive
Addictive enough to kill children
But I don't think they count 'cause the color of their skin
An eye for an eye we'll take ours in advance
First strike we'd just like to give war a chance
The righties say I'm wrong. I'm un-American
A terrorist McCarthyist Red Scare again
Put down your weapons and stop dropping bombs
This is murder by military "Iraqi-Nam"
Money for college, you signed up straight out of high school
You search and destroy because you do what you're told to