Before Ireland Can Go Free

Sean O'Casey, a child of the Dublin slums, was born in 1880 to a Protestant family. He had a grim childhood of poverty, poor eyesight, and ill health. Although a chronic eye disease forced him to stay away from school because of his eye treatments, his passion for learning stayed with him. In his youth he read widely in the classics and in the Bible, and at 84 he was learning through radio sessions of the Schools Program of the British Broadcasting Corporation.

His poor eyesight plagued him all his life, which he lived every day with the increasing threat of total blindness. As a child, he developed an ulcerated cornea in his left eye, the effects of which left his vision dim and filmy. His right eye took on the strain of his work and was also periodically affected. Several times a day he had to sponge his eyes with water as hot as he could bear in order to relieve the condition that severely hampered his vision.

Sean O'Casey was an idealist with a strong sense of justice that marked his life and work. Early in his adult life he was caught up in the fervor of the Gaelic League and in the amateur theatre movement. O'Casey claimed he found his "faith" in the socialist ideals of Jim Larkin’s crusade for the Irish working class. (The general strike of 1913 began the first demands for Irish liberation.)

In his early forties, while continuing to support himself as a laborer, we wrote, in quick succession three realistic plays about the slums of Dublin. The Shadow of a Gunman, Juno and the Paycock, and The Plough and the Stars were performed at the Abbey Theatre in 1923, 1924, and 1926 respectively. The first takes up the terrors of the Black and Tans in Dublin. The second has a Civil War theme, and the last is focused on the Irish Citizen Army and the Easter Rising.

These plays provoked public outcry mainly because of O'Casey's consistent refusal to glorify the violence of the nationalist movement, instead mocking the heroics of war and presenting the theme that dead heroes were far outnumbered by dead innocent people.

Frank O'Connor, in A Short History of Irish Literature: A Backward Look, says that what unifies these plavs and sets them apart from O'Casey's later works is "the bitter recognition that while the men dream, drink, drivel, dress up and go play-acting, some woman with as much brains and far more industry sacrifices herself to keep the little spark of human life from going out altogether."

O'Casey followed these plays of realism with The Silver Tassie, which was submitted to the Abbey Theatre in 1927. It was a play considered more symbolic and expressionistic than the previous Abbey plays. While three acts were in typical lively O'Casey style, the second act included chants and dance movement. The Silver Tassie was labeled a tragicomedy based on the cruel horrors of World War I. It showed the price which the common people have to pay for the stupidities of war. It was rejected for the Abbey Theatre by its directors, and in a formal letter from William Butler Yeats to O'Casey, Yeats suggested that O'Casey "had no subject" and that he was "not interested in the Great War." The controversy was carried to the public eye by O'Casey who, having copies of all the Abbey correspondence related to the decision to reject his play, sent the letters, along with his caustic reply to Yeats, to the London "Observer" and the "Irish Statesman." After this rejection, O'Casey offered no more plays to the Abbey Theatre.

Most of his plays which followed, filled with symbolism and fantasy, were infused with the evangelical view that became the theme of the rest of O'Casey's life. These plays include Within the Gates, The Star Turns Red, Purple Dust, Red Roses for Me, Oak Leaves and Lavender, and Cock A Doodle Dandy. With the exception of Within the Gates, none of the later plays had the critical acclaim or success that were given his earlier work.

O'Casey's alleged communism represents another aspect of his life and work which calls for interpretation. Brooks Atkinson, in his Introduction to The Sean O'Casey Reader, presents a balanced view of O'Casey’s professed allegiance. Like other aspects of O'Casey's creativity, Atkinson saw him as an original in his thinking, for O'Casey saw Keats, Shelley, Dickens, Whitman, even Jesus Christ as Communists. "Any man who is honest and gives all he can to the community is a Communist," O'Casey said.

His only humorless play, The Star Turns Red, put on by a leftist group in London in 1940, was his salute to Communism. As Atkinson points out, despite O'Casey's public comments, his play, and his articles for "The London Daily Worker," the author's "Communism had a flamboyant style. But it must have perplexed orthodox Communists. As usual, he made his own rules and preserved his personal independence."

O'Casey's finest writing after his self-imposed exile from Ireland in 1926 is considered to be his six volumes of autobiography: I Knock at the Door, Pictures in the Hallway, Drums Under the Window, Inishfallen Fare Thee Well, Rose and Crown, and Sunset and Evening Star. They were written as stream of consciousness works and in a brilliantly subjective style and voice of the third person named Johnny Casside. David Krause, author of Sean O'Casey and His World, says of the autobiography: "Like the voluble characters in his plays, O'Casey can be profligate and exuberant with words, playing with their sounds and meanings, indulging in the Joycean game of puns, parodies, malapropisms and comic invective."

Brooks Atkinson remarks that Sean O'Casey "wrote the most glorious English of his era - the English nearest in color and strength to the Elizabethan ... He had the moral courage of an idealist. Whatever his religious ideas may have been, I think God had reason to be proud of Sean O'Casey."

From Irish Society.
In the battle's prologue
Many a common man, woman and child had said
Goodbye to work and love and play
A child surprised in the door way
An old man stretched in the street
A young man near a lamp post
Which he had clutched when the bullet struck him
And down which he had clip when he died
His curiously white face containing
Wide eyes staring upwards
As if asking the sky : why this had happened
A stiff arm still half-encircling the lamp standard
A young lacy in holiday attire
Lying on her face maybe hurrying home
When she heard the uproar
But going too slow...
Or on the brilliant white blouse
A purple patch of death
Spreading over the middle of the back

You signed no proclamation
You invaded no building
You pulled no trigger
I know
I know but Ireland needed you all the same
Many will die like that
Before Ireland can go free. 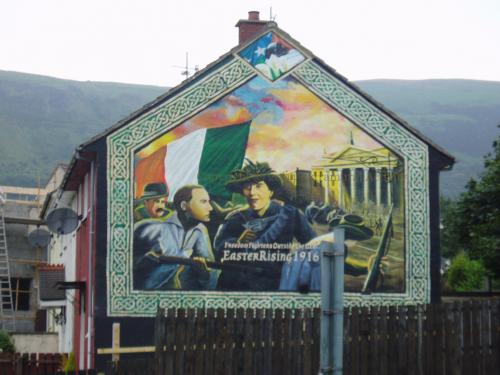