Written, arranged and produced by George Michael.
The Copyright is owned by G.K.Panayiotu.
Released on August 12th, 2002
And on the 2004 album Patience 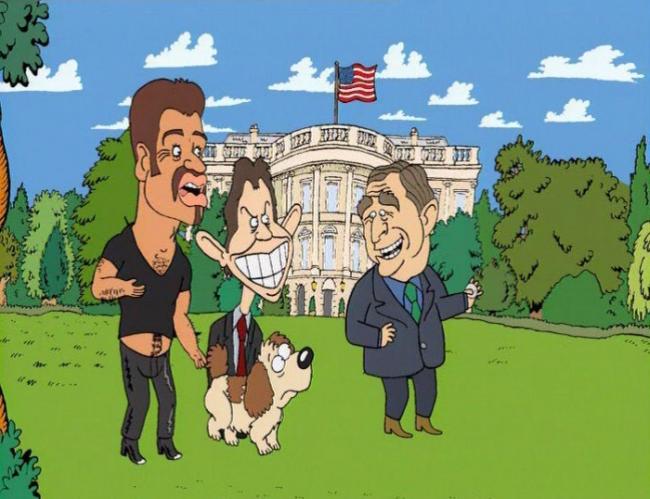 Shoot the dog! -but only that disguised in US president. 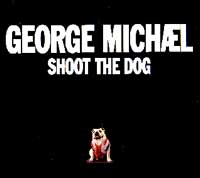 Statement of George Michael to 'Shoot the Dog'

'Firstly, I would like to stress that I am under no illusion that my opinions are of more importance than those of any member of society who may be reading this right now. I am first and foremost a singer/songwriter and lucky sod, and I'm fully aware that people don't really like their pop music and politics mixed these days. Nevertheless, I have strong opinions on Britain's current situation and I feel that in a time when public debate is being surpressed, even something as trivial as a pop song can be a good thing.
"Shoot The Dog" is intended as a piece of political satire, no more no less, and I hope that it will make people laugh and dance, and then think a little, that's all.
I am truly a patriotic man. I have been lucky enough to travel the world, and I see Britain for what it is, a great and multiracial nation, one that I have never left and never would. And it is my love for my country that gives me the inclination to defend it right now, in any way I can, regardless of the fact that I know I will be attacked by some for doing so.
In the past few days, something very positive has happened, in fact it is the very thing that this song hopes to encourage. Mr. Blair seems to have found the strength to challenge the views of President Bush, for the first time since September 11th. I'm delighted and re-assured by this, and I'm sure that I'm not alone. Don't get me wrong, I am definitely not anti-American, how could I be, I have been in love with a Texan for six years and we are still going strong.
My feelings about George W. Bush, however, are a little different. And I know I'm not alone in fearing his politics, and in hoping that our man Tony can be a calming and rational influence on him. But I have a question for you, Mr. Blair. On an issue as enormous as the possible bombing of Iraq, how can you represent us when you haven't asked us what we think. And let's be honest, we haven't even begun to discuss it as a society. So please Tony, much as we've all loved watching the best team we've had in 40 years at the World Cup, and much as we loved the Jubilee, now that we have some downtime, could we have a little chat about Saddam?'

Nine nine nine gettin' jiggy
People did you see that fire in the City?
It's like we're fresh out of democratic,
Gotta get yourself a little something semi-automatic yeah...

Nine nine nine gettin jiggy,
People did you see that fire in the city?
It's like we're fresh out of democratic
Gotta get yourself a little something semi-automatic yeah...

Cherie Baby, Spliff up
I wanna kick back mama
And watch the world cup with ya baby
Yeah, That's right!
We're getting freeky tonight
Stay with me tonight
Let's have some fun while Tony's stateside
It's gonna be alright
It's gonna be alright
See Tony dancing with Dubya
Don't you wanna know why?


"The song and video in question, "Shoot The Dog", is definitely not an attempt to express anti-American sentiment, nor an attempt to condone the actions of Al-Qaida. I have lived with an American citizen for the past six years, and have had a home there for the past 10. And I would never knowingly disrespect the feelings of a nation, which has suffered so much loss, so recently, for any reason. The debate which I hope to encourage by lampooning the relationship between our two leaders (and I think it is fair to say that lampooning is principally an American invention, born out of a desire for true democracy), is one that I think would protect all of us, but it would seem that neither the British nor American governments are keen to have us raise our voices, or ask a few simple, terrifying questions:
Saddam Hussein is without question now capable of changing the face of the planet. The level of destruction possible if this madman is cornered is too awful to put into words. So what should we do? Do we hope that time and his age will remove him from us all (don't forget, he is in his sixties, and God may smile on us in that respect), or do we bomb Iraq and hope to get rid of his regime right now? And, most frightening of all, if we do go looking for him, and succeed, isn't it possible that he will behave as he always has, like the bad guy in some tacky movie, sat in a room with nothing to lose and a few terrifying red buttons at his fingertips. Isn't that almost inevitable?
I do not believe this is melodrama. I believe this is the most important decision that our respective Governments have ever had to make on our behalf's. I cannot speak for America, I would not presume to, but there is no doubt that here in the UK, we are not being asked what we think. Like many of you over there in the States, we are just praying that Tony and Dubya know more than we do, because prayer is all that appears to be allowed.
"Shoot the Dog" is simply my attempt to contribute to the public debate that I feel should be taking place regarding Iraq and Saddam Hussein. I have tried to convey my message with humor, because the public is rightfully scared of these issues, and humor has often been a useful aide to political debate. And believe me, however irreverent I may be of Mr. Blair and Mr. Bush, my intentions are genuinely to do something, however small, to protect all of us, the people I love, and the people you love, from a disaster that we have the power to avoid. The record was never intended for American release, for the precise reason that I felt it could be misread in this very way, and it makes me truly sad that this press statement has been necessary. Once again, no offense to Americans was intended, but politicians are humans, not Gods, and God knows, there has never been a more important time to remember that than now.
Sincerely, George Michael"

Watch and read the transcript of this Kirsty Wark interview with George Michael aired on February 25, 2003. George talked of his political beliefs, his stand on the Iraq War, and why he wrote the song "Shoot the Dog."