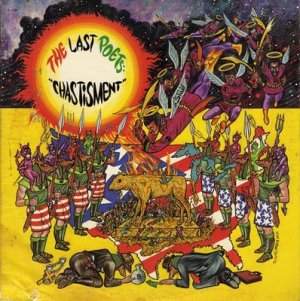 "Thesaur. Amer. Septent. Sigil." erano le parole in latino che comparivano sul vecchio simbolo del Dipartimento del Tesoro statunitense. Significano "The Seal of the Treasury of North America"...
Selfish desires are burning like fires
among those who hoard the gold
As the continue to keep the people asleep
and the truth from being told
Racism and greed keep the people in need
from getting what's rightfully theirs
Cheating, stealin and double dealing
as they exploit the peoples fears

Now, Dow Jones owns the people's homes
and all the surrounding land
Buying and selling their humble dwelling
in the name of the Master Plan

Credit cards, master charge, legacies of wills
real-estate, stocks and bonds on coupon paper bills
Now the US mints on paper prints, millions every day
and use the eagle as their symbol cos it's a bird of prey

The laurels of peace and the arrows of wars
are clutched very tightly in the eagles claws
filled with greed and lust,
and on the back of the dollar bill,
is the words IN GOD WE TRUST

But the dollar bill is their only God
and they don't even trust each other
for a few dollars more they'd start a war
to exploit some brother's mother
Then there's the pyramid, that stands by itself
created by Black people's knowledge and wealth
and over the pyramid hangs the devil's eye
that stole from the truth and created the lie

Now ANNUIT means and endless amount stolen over the years
and COEPTIS means a new empire of vampire millionaires
And NOVUS is a Latin word meaning something new
an ORDO means a way of life chosen by a few
SECLORUM is a word that means to take from another
knowledge, wisdom and understanding stolen from the brother

Now on the front of the dollar bill
to the right of Washington's head
is a small seal in the shape of a wheel
with the secret that's been left unsaid
The symbols in the middle represent the riddle
of the scales, the ruler and the key;
the square rule is a symbol
from the craft of masonry
The scales represent Libra
the balance of the seventh sign
They also represent the Just-Us
which you and I know is blind
The key unlocks the mysteries
of the secrets of the seal
So that only the Govern-u-men
would know what they reveal

The four words apart form the last parts of
the secrets of the seal
and tells how they fooled the people
into thinking paper money was real!

Now, THESAUR means the treasury
where they store the gold they stole
and AMER means to punish
like the slaves they bought and sold
Then SEPTENT means seven
like seventeen-seventy-six
when the thirteen devils gathered
to unleash their bag of tricks
The SIGIL means the images
they've created to fool the world
like the colors on Old Glory
the flag that they unfurled

Now the red was the color of the Indian man
White was the devil's who stole the land
Blue was the eyes that hypnotised
with the tricks and traps they sprung
and even to this very same day
they all speak with forked tongue!
And so the power is in the hand of the ruling classes
playing god with the fate of all the masses
so the people don't get any in the land of the plenty
because E PLURIBUS UNUM means One Out Of Many.