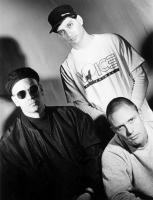 "Don't think that modern fascists are like Hitler or Mussolini. Today's Big Government-Big Business tyrants are just as willing to use violence. But they do it more efficiently than the old-time fascists-- with higher tech and lower costs to them. They have the best looks, politicians, celebrities, and control mechanisms that money can buy. Yes, their own conscience tells them that true democracy would be nice. But suppressing their conscience, they undermine the rights of the working and middle classes. Their operating principle is "Might, Money, Male, Murder-- and also White--Make Right." They wreck the environment. They fool you, rule you, use you, abuse you--and... (Continues)

Welcome ladies and gentlemen to the end of the twentieth century and the arrival of friendly fascism. Regrettably, millions will die as before. But just think of the tremendous selection and savings you’ll gain. Of course the loss of freedom and democracy are tragedies, I know, but consider the entertainment value contained within. And to remind you, it is you, the people, who have mandated this course of our fate so please come with me….
(Continues)
Contributed by Alessandro 2010/2/3 - 13:54
×