一本の鉛筆 [If I Had One Pencil]

Tadatoshi Akiba is the Mayor of Hiroshima and his favorite peace song is called "One Pencil," a song by a famous Japanese singer named Hibari Misora. About 15 years ago, when Mayor Akiba was a member of the Diet, one of his colleagues told him about the song and that was the first time he heard it. The song is about Hiroshima and contains such lyrics as, "If I had just one pencil, I would write about the morning of August 6th." Mayor Akiba, who sometimes sings this song at karaoke, remarked, "The lyrics aren't long, but I like the fact that it clearly calls for an end to war." At the same time, he feels the song is successful because "One Pencil," although expressing opposition to war and nuclear weapons, is free from any specific political ideology. This is a key attribute of the song and makes it different from traditional anti-war songs. In 2000, Mayor Akiba included some of the lyrics from "One Pencil" in his Peace Declaration. He also told us that the late Mayor of Nagasaki, Iccho Ito, shared the song during his travels abroad. (Aya Nakashige,18) - Peace Seeds 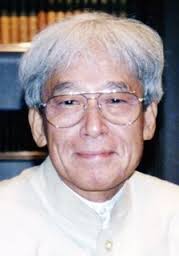 Zenzō Matsuyama (松山善三 Matsuyama Zenzō?, born 3 April 1925) is a Japanese script writer and film director.[1] He was born in Kobe and grew up in Yokohama. After leaving school, he began training to become a doctor but dropped out of medical school to take up a career in films. In 1948 he became an assistant director at Shochiku studios. With the support of Keisuke Kinoshita, he also began writing film scripts. His first filmed script was Kojo no tsuki, based on the song Kōjō no Tsuki, filmed in 1954. In 1955 he married actress Hideko Takamine. He made his debut as a director with a film called Na mo naku mazushiku utsukushiku in 1961. He continued to work as a scriptwriter for films like Proof of the Man as well as a director. He also wrote the lyrics for a song Ippon no enpitsu for Hibari Misora. (en.wikipedia)
あなたに 聞いてもらいたい
あなたに 読んでもらいたい
あなたに 歌ってもらいたい
あなたに 信じてもらいたい

If automatic translation by Google Translator still shows irresoluble problems, automatic transcription shows an acceptable degree of reliability and we use it with pleasure, waiting for better instruments or transcriptions made by human hand. [AWS/CCG Staff]
IPPON NO ENPITSU

There's no “by Riccardo Venturi” or by others here, although the translation is my material work. I do not know a single word of Japanese and I didn't plan to “learn it in fifteen days”. It is, so to say, sort of “collage translation”: as it seems there's no complete translation of the song available on line, I have worked it from a number of fragments (in English, of course) I found on the Web. Its reliability may be doubtful, of course; but I think it may give an idea of what the song says. The 6th August mentioned in the song is, as everyone should know, the day the fist H-bomb was launched on Hiroshima. [RV]
IF I HAD ONE PENCIL