We Work For The Russians 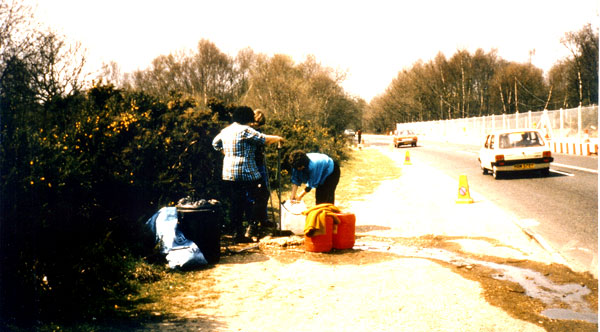 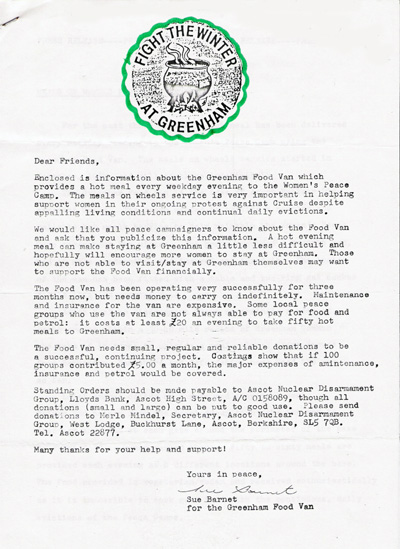 No information about author and composer

For the past three months, a hot meal has been delivered every weekday evening to the Women's Peace Camp using the Greenham Food Van. The meals on wheels service started in November, 1984, and will continue indefinitely. The Greenham Food Van is the idea of Ascot Nuclear Disarmament Group. The group wanted to provide a regular and reliable hot meals service to help maintain the Women's Peace Camp throughout the winter.
The group acquired a transit van, had it made roadworthy, and insured and taxed it. The inside of the van has been fitted with a table and two-ring gas cooker for heating and serving food.
Ascot Nuclear Disarmament Group co-ordinate a rote of Peace groups within a 30-40 mile radius of Greenham Common who take it in turn to provide a meal. Local peace groups from Berkshire, Hampshire and Oxfordshire have used the van so far. Local groups decide on a menu and prepare a meal.
A driver and helper from the local group then take the van to Greenham and stop at each gate around the perimeter of the base to serve food to womem camped there: Fifty-to sixty meals are provided each evenin~ at 8 different locations around the base. The food provided is vegetarian/vegan and received enthusiasticaly as it is impossible to cook good food with the continuous, daily evictions of the Peace Camps.
The cost of maintaining, insuring, and taxing the Greenham Food Van have been met through donations and standing orders from individuals and Peace Groups nationwide.
The cost of food and petrol have been paid by the local groups using the van.
For more information, contact Merle Mindel, Ascot Nuclear Disarmament Group, Tel. Ascot 228770

THE FOOD RUNS TO GREENHAM

Anne Lee: I was able to spend only short stays at Greenham, but still remember the food runs. I stayed at Indigo Gate, the main gate on the north side of the base. The USAF c. 1986 moved itseveral hundred metres further west. We then called it Woad Gate (woad was an ancient blue dye with which ancient Britons painted their bodies when confronting the Roman adversary). The campsite was on the road verge.
At one stage there were 9 camps: 7 at the Gates, identified by the women as the colours of the rainbow. Between Green and Blue Gates, there was Emerald camp - opposite the Cruise Missile Silos and between Red and Orange was Red Gap, where an internal road terminated at the fence, but there was no gate - it would, however, have been possible for the USAF to have brought out the missile convoy through Red Gap.
The evictions were carried out by Council Bailiffs (mainly 'Baldy' and Willis) eqipped with a refuse muncher truck and a flat-back lorry for larger furniture items. In the early days of the evictions they used to steal womens' property without giving the women time to pack up and leave and physically assault women (see TV programme Carry Greenham Home). After complaints the Bailiffs were accompanied by a police escort to ensure they did it legally. The women were permitted to load all the gear into cars, vans and onto prams. It is legal to move along the highway, but not to camp. After the Bailiffs had gone it was possible to return and set up camp again. This meant that we couldn't leave the camp site, to do water runs, etc, until after the Bailiffs had been.

In the winter of 1985 Newbury District Council decided to evict the Greenham Women and clear them out forever. This necessitated making it impossible for women to live on the campsites.
The Bailiffs then started work at 7am and worked continuously round the perimeter evicting all the camps, then starting again and working until 7 in the evening. During the worst of the winter weather it was not possible for the women to be unpacking the camp gear each time. As the Bailiffs put out the fires with fire extinguishers, it was difficult, sometimes not possible, to relight the fires and make a hot drink before the Bailiffs got back. The camps might be evicted up to five times a day. It went on day after day after day in the winter.
The hot food runs made survival possible. They also brought firelighters, dry wood, dry blankets and other essentials. There was also an international financial support network for Greenham.
Women at Woad Gate made up this song (to the tune of 'Beside the seaside, beside the sea')
Baldy and Willis are getting on now.
Well over 40 I should say,
But they're still little boys and they like to play with toys -
The yellow muncher and the wee white truck.
We Work For The Russians
We work for the Russians
At tuppence* a day
They ask us to stay here
And that's why we stay
We drink lots of vodka
And that's why we're gay
Hey.