Jesus Thinks You're a Jerk 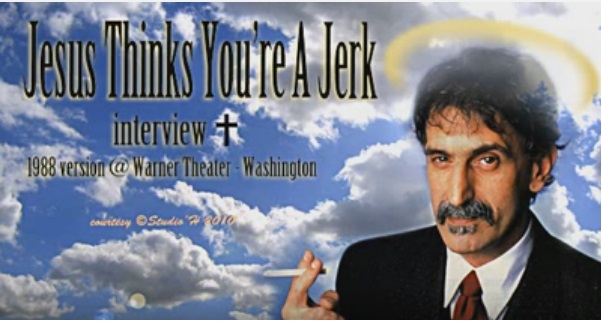 Did he really choose Tammy to do His Work?
Robertson says that he's The One
Oh sure he is,
If Armageddon
Is your idea of family fun,
An' he's got some planned for you!
(Now, tell me that ain't true)

Now, what if Jimbo's slightly gay,
Will Pat let Jimbo get away?
Everything we've heard him say
Indicated that Jim must pay,
(And it just might hurt a bit)
But keep that money rollin' in,
'Cause Pat and naughty Jimbo
Can't get enough of it

Jim and Pat should take a pole
(Right up each saintly glory-hole),
With tar and feathers too
Just like they'd love to do to you

('Cause they think you are bad
And they are very mad)

'Cause some folks don't want prayer in school!

(We'd need an ark to survive the drool
Of Micro-publicans, raised on hate,
And 'Jimbo-Jimbo' when they graduate)

Conviced they are 'The Chosen Ones'
And all their parents carry guns,
And hold them cards in the N.R.A.
(With their fingers on the triggers
When they kneel and pray)

With a Ku-Klux muu-muu
In the back of the truck,
If you ain't Born Again,
They wanna mess you up, screamin',
"No abortion, no-siree!"
"Life's too precious, can't you see!"
(What's that hangin' from the neighbor's tree?
Why, it looks like 'colored folks' to me
Would they do that seriously?)

Imagine if you will
A multi-millionaire Television Evangelist,
Saved from Korean Combat duty by his father, a U.S. Senator

Studied Law
But is not qualified to practice it

Father of a "love child"
Who, in adulthood, hosts the remnants
Of papa's religious propaganda program

Claims not to be a "Faith Healer",
But has, in the past,
Dealt sternly with everything from hemorrhoids to hurricanes

Involved in suspicous 'tax-avoidance schemes',
(Under investigation for 16 months by the I.R.S.)

Claims to be a MAN OF GOD;
Currenty seeking the United States Presidency,
Hoping we will all follow him into
The Twilight Zone

What if Pat gets in the White House,
And suddenly
The rights of 'certain people' disappear
Mysteriously?

Now, wouldn't that sort of qualify
As an American Tragedy?
(Especially if he covers it up, sayin'
"Jesus told it to me!")

I hope we never see that day,
In The Land of The Free
Or someday will we?
Will we?

And if you don't know by now,
The truth of what I'm tellin' you,
Then, surely I have failed somehow

And Jesus will think I'm a jerk, just like you
If you let those TV Preachers
Make a monkey out of you!

I said,
"Jesus will think you're a jerk"
And it will be true!

Jim and Tammy!
Oh, baby!
You gotta go!
You really got to go