Sing Sing was the third prison built by New York State. In 1824 the New York Legislature gave Elam Lynds, warden of Auburn Prison and a former Army captain, the task of constructing a new, more modern prison. Lynds spent months researching possible locations for the prison, considering Staten Island, The Bronx, and Silver Mine Farm, an area in the town of Mount Pleasant, located on the banks of the Hudson River.
He also visited New Hampshire, where a prison was successfully constructed by inmate labor, using stone that was available on-site. For this reason, by May, Lynds had finally decided on Mount Pleasant, located near a small village in Westchester County with the unlikely name of Sing Sing. This appellation was derived from the Native American words "Sinck Sinck" which translates to "stone upon stone". The legislature appropriated $20,100 to purchase the 130-acre (0.53 km2) site, and the project received the official stamp of approval. Lynds hand-selected 100 inmates from his own private stock for transfer and had them transported by barge along the Erie Canal to freighters down the Hudson River. On their arrival on May 14, the site was "without a place to receive them or a wall to enclose them"; "temporary barracks, a cook house, carpenter and blacksmith’s shops" were rushed to completion.
When it was opened in 1826, Sing Sing was considered a model prison, because it turned a profit for the state, and by October 1828 was finally completed. Lynds employed the Auburn system, which imposed absolute silence on the prisoners; the system was enforced by whipping and other brutal punishments.
Thomas Mott Osborne's tenure as warden of Sing Sing prison was brief but dramatic. Osborne arrived in 1914 with a reputation as a radical prison reformer. His report of a week-long incognito stay inside New York's Auburn Prison indicted traditional prison administration in merciless detail.
Prisoners who had bribed officers and intimidated other inmates lost their privileges under Osborne's regime. One of them conspired with powerful political allies to destroy Osborne's reputation, even succeeding in getting him indicted for a variety of crimes and maladministration. After Osborne triumphed in court, his return to Sing Sing was a cause for wild celebration by the inmates.
Another notable warden was Lewis Lawes. He was offered the position of warden in 1919, accepted in January 1920, and remained for 20 years as Sing Sing's warden. While warden, Lawes brought about reforms and turned what was described as an "old hellhole" into a modern prison with sports teams, educational programs, new methods of discipline and more. Several new buildings were also constructed during the years Lawes was warden. Lawes retired in 1941 after 21 years as warden and died six years later. In 1943, the old cellblock was finally closed and the metal bars and doors were donated to the war effort. In 1989, the institution was accredited for the first time by the American Correctional Association, which established a set of national standards by which every correctional facility should be judged.
Today Sing Sing houses more than 2,000 inmates, with about 1,000 people working there and 5,000 visitors per month. The original 1825 cellblock is no longer used and in 2002 plans were announced to turn this into a museum. In April 2011 there have been talks to close the prison in favor of real estate.

Executions
Four inmates under federal death sentences were executed at Sing Sing. On June 19, 1953, Julius and Ethel Rosenberg were electrocuted for espionage. On August 12, 1952, Gerhard A. Puff was electrocuted for murder. The last prisoner to be executed in the electric chair was on August 15, 1963 for Eddie Lee Mays who was convicted of murder. In 1972, the United States Supreme Court ruled in Furman v. Georgia that the death penalty was unconstitutional and the chair was no longer used. Altogether, 614 men and women were executed at Sing Sing. The electric chair was later moved to Greenhaven Prison in working condition but was never used again.
In 1996, Katherine Vockins founded Rehabilitation Through the Arts (RTA) at Sing Sing. RTA works in collaboration with theater professionals to provide prisoners with a curriculum of year-round theater-related workshops. The RTA program has put on a number of plays at Sing Sing open to prisoners and community guests. The program has shown that the use of dramatic techniques leads to significant improvements in the cognitive behavior of the program's participants inside prison and a reduction in recidivism once paroled. The impact of RTA on social and institutional behavior was formally evaluated by John Jay College for Criminal Justice, in collaboration with the NYS Department of Corrections. Led by Dr. Lorraine Moller, Professor of Speech and Drama at John Jay, The study found that RTA had a positive impact on prisoners who participated in the program, showing that "the longer the inmate was in the program, the fewer violations he committed.". The RTA program currently operates at 5 other New York state prisons.
Hudson Link for Higher Education in Prison, a not-for-profit organization was founded to provide college education to incarcerated people in an effort to help reduce recidivism and poverty, while strengthening families and communities. In 1998, as part of the get-tough-on-crime campaign, state and federal funding for college programs inside prison was stopped. Understanding the positive effects of education in the transformation and rehabilitiation of incarcerated people, inmates at Sing Sing Correctional Facility reached out to religious and academic volunteers to develop a college-degree granting program. Under the leadership of Dr. Anne Reissner, Hudson Link for Higher Education in Prison was founded to restore college education at Sing Sing through private funding.
Plans to turn part of Sing Sing into a museum go back to 2005, when local officials sought to turn the old power house into the museum, linked by a tunnel to a retired cell block, at a cost of $5.0 Million. In 2007, the village of Ossining applied for $12.5 Million in Federal money for the project, expected then to cost $14 Million. The proposed museum will display the Sing Sing story unfolded over time.
The use of the expression "up the river" to mean "in prison" derives from the practice of sentencing people convicted in New York City to serve their prison terms in Sing Sing, which is literally "up the Hudson River" from the city. Its use dates from 1891...
Do you hear the tapping
On the bars and prison ring through
Sounding like a concert?
For who?

Hear my song of pleading, sing
On the bars that hold me, Sing Sing
Beggin' to forgive me,
My love.

And two thousand inmates sing
Bang the bars that caged them, SingSing
Answering my chorus
So long

At the break of daylight
They'll be down to get me, let's go
It will all be over,
I know..

But two thousand inmates sing
Symphony for love, so sing, sing
Bang the bars that caged them
So long

Your eyes, your lips, your hair, your face
Gone!


Sing Sing Prison.
These pictures of Sing Sing Prison were taken in the summer of 1971, in Ossining, New York. It is located on the Hudson River, north of New York City. This is the prison that added phrases like "Up the river" and "The Big House" to our lexicon.
Keep in mind that these photos were taken over thirty years ago, some of these buildings may have been modified or demolished completely. 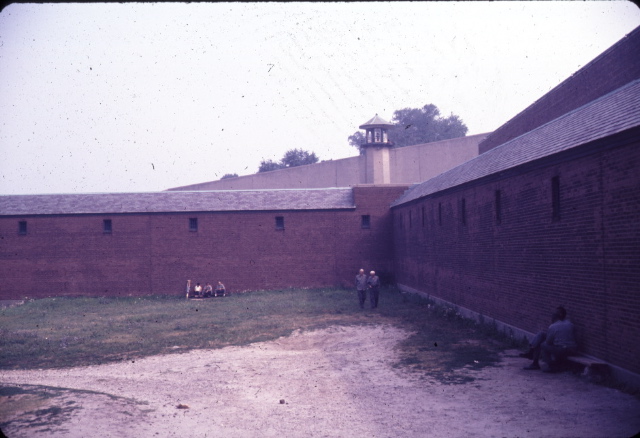 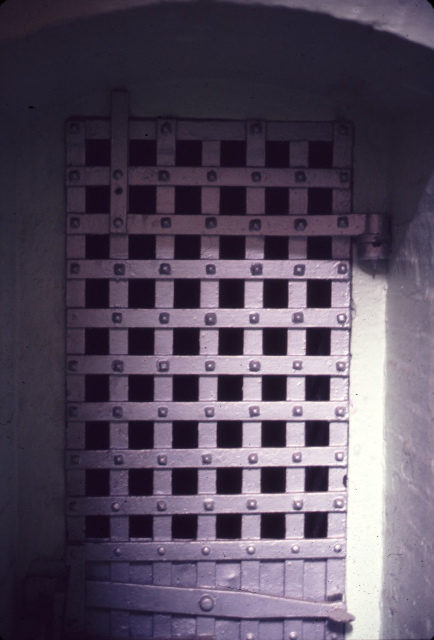 A Cell In The Old Cell Block 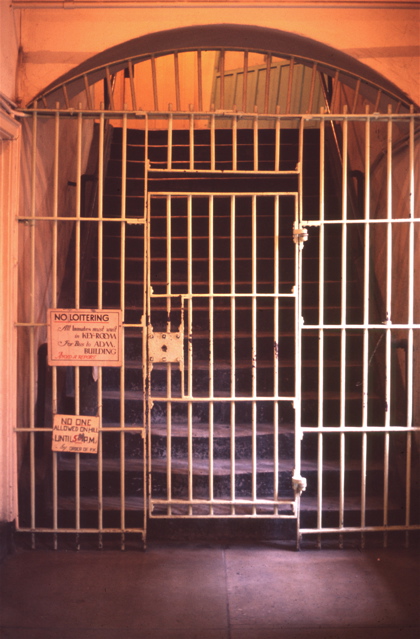 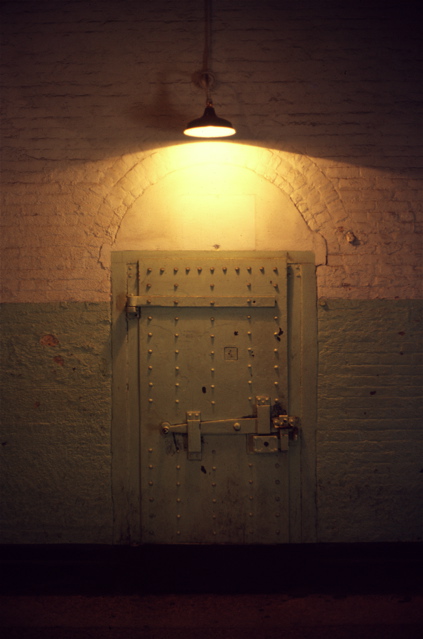