Violence on Women: just like and worse than war
The Greenham Common Women's Peace Camp Songbook 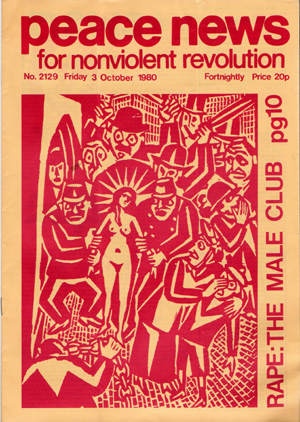 Wih acronym: What I Have.

Reclaim the Night marches and rallies have traditionally been organised by collectives of unpaid women who have worked together in their communities to organise peaceful protests against sexual violence towards women and children, and to promote women's strength and survival. Reclaim the Night represents a claim for women's basic human right to live in freedom from discrimination and fear of violence.

The first rally took place in Rome in 1976, as a reaction to reported rapes reaching 'Astronomical' figures (16000 per annum). Around 10,000 women and children marched through the centre of the city. 1 & 2 Marches followed in 1977 in West Germany. Women there demanded, "the right to move freely in their communities at day and night without harassment and sexual assault".

Herstory of Reclaim the Night
Though Eve was made from Adam's rib,
9 months he lay within her crib,
How can a man of women born,
Thereafter treat her sex with scorn.
For though we bear the human race,
To us is given second place.
And some men put us lower still,
By using us against our will.
And if we choose to walk alone,
For us there is no safety zone.

If we're attacked we take the blame,
They say that we began the game.
And though you prove our injury,
The judge may set the rapist free.
Theefore the victim is to blame,
Call it nature, but rapes the name.

Reclaim the night and wih the day.
We want the right that should be our own.
A freedom women have seldom known.
The right to live, the right to walk alone, without fear.

A husband has his lawful rights
Can take his wife when'eve he likes.
And courts uphold time after time,
That rape in marriage is no crime.
The choice is hers and hers alone,
Submit or loose your kids and home.
When love becomes a legal claim,
Call it duty, but rape's the name.

This system gives the prize to all
Who trample on the weak and small.
When fathers rape they surely know
Their kids have nowhere else to go.
Try to forget, don't ask us to
Forgive them, they know what they do.

When exploitation is the norm,
Rape is found in many forms,
Lover wages, meaner tasks,
Poorer schooling, second class.
We serve our own, and like the men,
We serve employers it follows then,
That body's rape is nothing new,
But just the servant's final due.

We raised our voices in the past,
And this time will not be the last.
Our bodies gifts is our to give,
No payment for the right to live.
Now we've outgrown their status quo,
We claim the right to answer
If without consent he stakes a claim,
Call it rape, for rape's the name.