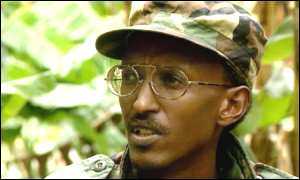 10 years after the Rwandan genocide that killed nearly a million people in only 100 days....I still can't make out my feelings about Paul Kagame (now the President of Rwanda). One of the most brilliant military minds of the 20th Century, his small rebel army effectively ended his country's genocide by defeating the much larger government army (which was being supplied with weapons by the French government) as the US (terrified of another Somalia-type debacle) stood and watched. Despite Kagame's brilliant tactical victory, many believe he could have done more if he placed as much importance on stopping the slaughter of innocents as he did on military victory in the field. A slippery slope if there ever was one, since you could argue that one was not possible without the other. One thing is certain, however. Without Kagame, the number of dead would have risen astronomically. And for me to pass judgment on Paul Kagame would be, in the light of my own elected government's response to the genocide, the worst form of hypocrisy. The song is about the gray area swirling around in my own head. That's all.

Members of Rwanda's Hutu majority killed their Tutsi neighbors (along with Hutu moderates) at a clip 5 times faster than the Germans killed the Jews of Europe. Their weapon of choice was the machete. Yet, most American's to this day have never even heard of Rwanda...nor the complicated man that this song is about. I urge you to learn more.
They say the love of one's country
is a terrible thing
when laced with a hatred
that the devil might bring
and so you're forced into fighting
killing others who try
to use the blood of others
like it's money to buy

There were young girls in your country
Tutsi and Hutu..aged 12
they were lined up at gunpoint against the wall
and told to separate themselves
yet they refused to move
said "we're Rwandan's that's all we'll say"
and so all were slaughtered
under the broad light of day