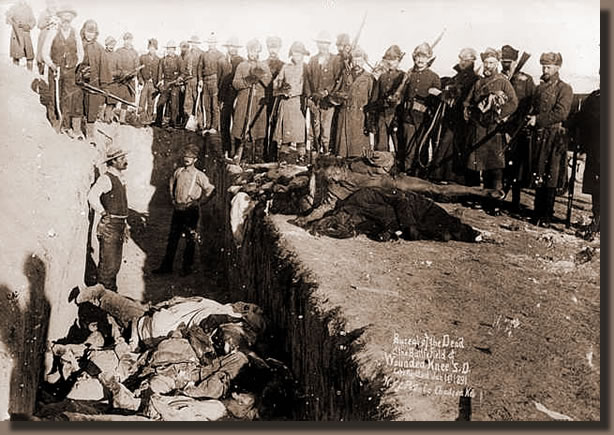 Bigfoot was an Indian Chief of the Miniconjou band,
a band of Miniconjou Sioux from South Dakota land.
Bigfoot said to Custer, stay away from Crazy Horse,
but Custer crossed into Sioux land, and he never came back across.
Then Bigfoot led his people to a place called Wounded Knee,
and they found themselves surrounded by the Seventh Cavalry.
Big Chief Bigfoot, rise up from your bed,
Miniconjou babies cry for their mothers lyin' dead.

Bigfoot was down with a fever when he reached Wounded Knee,
and his people all were prisoners of the Seventh Cavalry.
Two hundred women and children and another hundred men
raised up a white flag of peace, but peace did not begin.
An accidental gunshot, and Bigfoot was first to die,
and over the noise of the rifles you could hear the babies cry.
Big Chief Bigfoot, it' s good that you can't see,
revenge is being wrought by Custer's Seventh Cavalry. 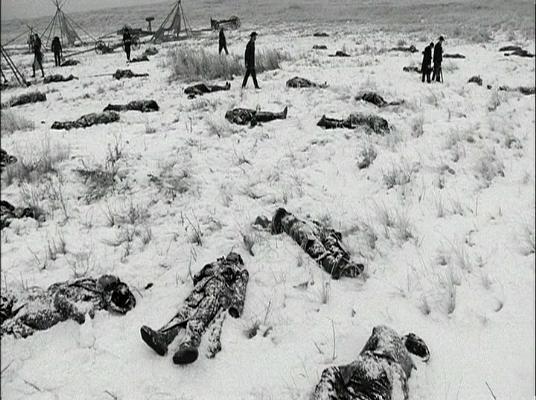 
THE INDIAN GHOST DANCE AND WAR
Barracks Ballad by Private. W. H. Prather, an African-American member I Troop, Ninth Cavalry (Black Buffalo Soldiers). Composed and sung by troops during the "Wounded Knee" campaign of 1890 In honor of the victory at Wounded Knee

The Red Skins left their Agency, the Soldiers left their Post,
All on the strength of an Indian tale about Messiah's ghost
Got up by savage chieftains to lead their tribes astray;
But Uncle Sam wouldn't have it so, for he ain't built that way.
They swore that this Messiah came to them in visions sleep
And promised to restore their game and Buffalos a heap,
So they must start a big ghost dance, then all would join their band,
And may be so we lead the way into the great Bad Land.

They claimed the shirt Messiah gave, no bullet could go through;
But when the Soldiers fired at them, the saw this was not true,
The Medicine man supplied them with their great Messiah's grace;
And he, too, pulled his freight and swore the 7th hard to face.

About their tents the Soldiers stood, awaiting one and all,
That they might hear the trumpet clear when sounding General call,
Or Boots and Saddels in a rush, that each and every man
Might mount in haste, ride soon and fast to stop this devilish band;
But Generals great like Miles and Brooke don't do things up that way,
For they know an Indian like a book, and let him have his way
Until they think him far enough and then to John they'll say,
"You had better stop your fooling or we'll bring our guns to play.

The 9th marched our with splendid cheer the Bad Lands to explo'e--
With Col. Henry at their head, they never fear the foe;
So on they rode from Christmas eve 'till dawn of Christmas day;
The Red Skins heard the 9th was near and fled in great dismay.
The 7th is of courage bold, both officers and men;
But bad luck seems to follow them and twice has took them in.
They came in contact with Big Foot's warriors in their fierce might;
This chief made sure he had a chance of vantage in the fight.

A fight took place; 'twas hand to hand, unwarned by trumpet call.
While the Sioux were dropping man by man, the 7th killed them all.
And to that regiment be said, "Ye noble braves, well done.
Although you lost some gallant men, a glorious fight you've won."
The 8th was there, the 6th rode miles to swell that great command.
And waited orders night and day to round up Short Bull's band.
The Infantry marched up in mass the Cavalry's support,
And while the latter rounded up, the former held the fort.

E battery of the 1st stood by and did their duty well,
For every time the Hotchkiss barked, the say a hostile fell.
Some Indian soldiers shipped in too and helped to quell the fray,
And now the campaign's ended and the soldiers marched away.
So all have done their share, you see, whether it was thick or thin,
An all helped break the ghost dance up and drive the hostiles in.
The settlers in that region now can breathe with better grace;
They only ask and pray to God to make John hold his base.

They claimed the shirt, etc. 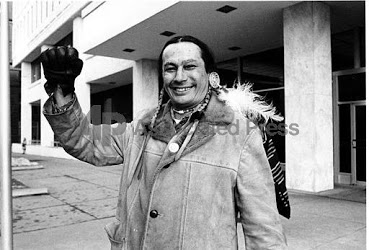