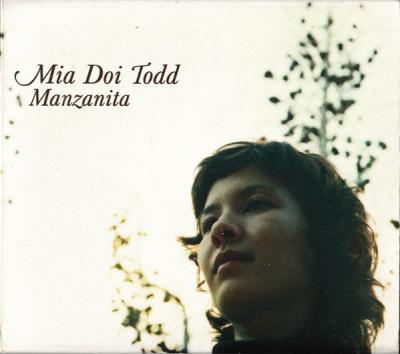 ''I like to ask questions,'' said Mia Doi Todd, a quietly thoughtful songwriter who released her first major-label album last year. ''I don't neccessarily like to answer them for people, but I definitely like to make them turn around and question what they have taken for granted.'' Ms. Todd has lately been performing Joni Mitchell's antiwar song ''The Fiddle And The Drum'' and a new one of her own, ''The Way,'' which mingles existential ruminations and lines like ''We're junking bonds, we're dropping bombs we've made by guzzling gasoline.'' She has been playing ''The Way'' whenever she gets a chance to appear on radio broadcasts, generally noncommercial ones. ''I wish it were on a single, right now,'' she said.

I've been looking for a way out
Of this crazy situation now--
The world in crisis; seems like paradise
Was lost and won't be found
And all of life is endangered
And on the verge of breaking down

I wake up all fear and dread-locked
By all the things I cannot talk about
We built our house of cards on ignorance
A landfill of deceit. The walls are hollow
And we listen, worry what they will secrete

We all know they've got it fixed
In politico-economics
We're junking bonds; we're dropping
Bombs we've made by guzzling gasoline
Public confidence is shaken
Like the apple from the tree

Namu Amida Butsu, gomen
Forgive me for my trespasses
I do my best to exist east of Eden
West of garbagetown, over-accumulated
Karma. Armageddon, full meltdown
Woe woe woe woe is me

I've been looking for a way out
Of this crazy situation now--
Our world in crisis; seems like paradise
Was lost and won't be found
And both our lives are endangered
And on the verge of breaking down

Then the garden gates swing wide
And we enter paradise
We are angels; we are good
We open our wings; we've understood
How time and change are fine
They're the way. They're the way