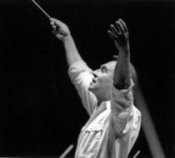 On 28 February 1986, prime minister Olof Palme was assassinated in Stockholm; the assassination remains unsolved. On 2 March 1986, I was a young university student in Florence. That morning, a Monday, professor Birgitta Ottosson, my teacher of Swedish and Scandinavian literature, came crying into the classroom with a copy of the newspaper Dagens Nyheter, saying very sad words in a mixture of Swedish and Italian. We all the students were left speechless. Professor Birgitta Ottosson was not only a renowned scholar, but also a member of Nonviolent Movement of Perugia and other left-wing pacifist associations. She presented me the copy of Dagens Nyheter, which I still keep; here it is. 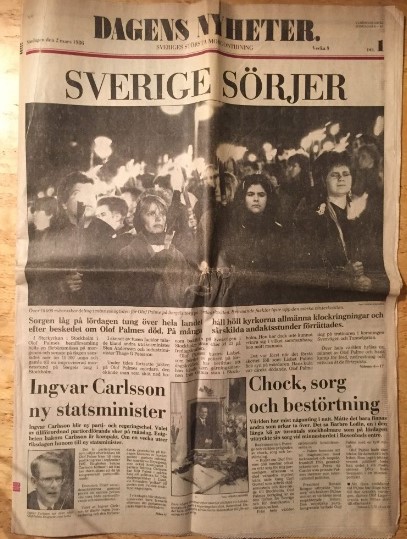 Just one year later, in 1987, the Florentine-born composer Sylvano Bussotti wrote a short piece of music in memory and honour of Olof Palme, commissioned by the municipality of Cadoneghe in the province of Padova. Cadoneghe's town sports hall is named after Olof Palme. Here it is.

Professor Birgitta Ottosson died on June 1, 2002. May she rest in peace. [RV]

Hear, hear, Riccardo! Olof Palme deserves to be called a remarkable statesman. A controversial figure dearly loved and bitterly hated both in Sweden and on the international arena, I value him primarily for his outspokenness. He had the guts to sharply criticize the US bombings of Hanoi in Christmas 1972 by comparing them with the destruction of Guernica and he hit the nail on the head calling Franco's dictatorship »bloody murderers« on September 28, 1975, one day after the execution of two ETA members and three FRAP militants.

Palme's murder in 1986 was indeed an act carried out by dark forces or as Mikael Wiehe puts it in his lyrics to the song Natten: »Where shadows hunt shadows that no one can catch«. Or as Björn Afzelius expresses it in his song På mäster Olofs tid: »No one had ever seen a night so dark« (English translations by Ceil Herman).

And you can add to all this the help, hospitality and support that Olof Palme gave to Chilean refugees in Sweden after Pinochet's coup, and several other things. I greatly respect Olof Palme also for his social visions and for the way he tried to put them into practice in a given historical period. Every statesman is likely to be controversial, and certainly not even Olof Palme escapes this characteristic. Moreover, I am not talking about the "Swedish myth" which was very fashionable in those years. No country has been, is and will never be heaven on earth. Sweden (as evidenced by many songs included in this site) was full of social struggles aimed at enemies, like the great Capital and subordinated conservatism, which vere clearly identifiable. Rather obviously, all this provoked a reaction. On February 28, 1986 the reaction had its result. Many, too many years have passed.