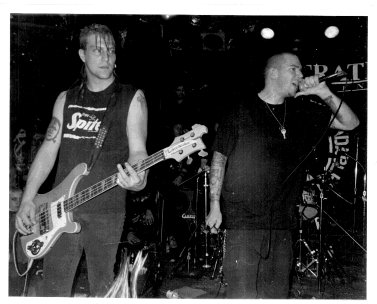 Aus Rotten
The self serving U.N. who manufacture war
Saw no legal way to stop the killings committed in East Timor
"We don't want to create a situation in which the responsibility
that is the government of Indonesia's is shifted to the international community."
But when there was a "Crisis in Kosovo" we heard a different speech
The human rights defended were worth the jurisdiction breached
And when they declared that Yugoslavia must be stopped
Operation Allied Force made sure the bombs were dropped
The slaughter of the East Timorese should have been prevented
Just like the scorched earth policy that was also implemented
In the U.N.'s moral conscience had any real sincerity
But instead they hide behind a mask of plausible deniability
So now the "peacekeepers" of the western world seem humbled by regret
Unable to stretch the U.N. budget to help empower UNAMET
Leaving Indonesia hopelessly caught between two warring factions
And their economy could be destabilized by outside interaction
The militias are solely responsible for murdering the East Timorese
That's what the U.N. and the American media would lead you to believe
But the Indonesian government is not as innocent as it seems
They're the U.S. sponsored terrorists of a puppet rogue regime
The militias are just a front for the Indonesian military
Committing genocidal actions while projecting legitimacy
Suppressing the "special autonomy" the referendum ballot guaranteed
Preventing the independence that the election so decreed
The U.S. were long time supporters of Shurarto's authoritarian rule
Whose atrocities were overlooked for being a beneficial tool
Buying U.S. political support under a false pretense
So when the political tide turned and special interests were at stake
The U.S. helped dismantle that dictatorship and build Indonesia a new state
Secretly trained army militia to keep their prosperity intact
Insuring that in spite of their oppression the U.N. would never act
So the western leaders cry crocodile tears and offer empty threats
In the face of another genocide they claim they won't forget
Their hypocrisy is blatantly obvious with the excuses that they gave
These protectors of world democracy bury more people than they save