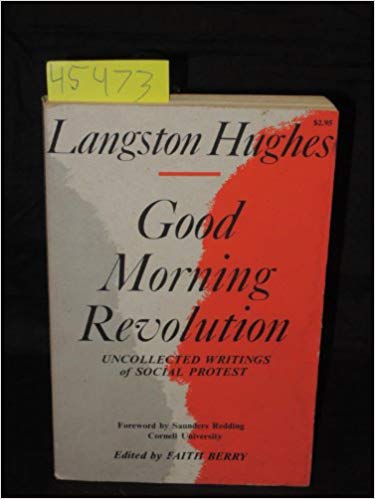 Un testo potentissimo, scritto da colui che all'epoca fu definito "a red devil in a black skin"...
E a quei tempi ci voleva molto coraggio ad essere negro e comunista...
Good-morning, Revolution:
You're the very best friend
I ever had.
We gonna pal around together from now on.
Say, listen, Revolution:
You know, the boss where I used to work,
The guy that gimme the air to cut down expenses,
He wrote a long letter to the papers about you:
Said you was a trouble maker, a alien-enemy,
In other words a son-of-a-bitch.
He called up the police
And told 'em to watch out for a guy
Named Revolution.

You see,
The boss knows you're my friend.
He sees us hangin' out together.
He knows we're hungry, and ragged,
And ain't got a damn thing in this world —
And are gonna do something about it.

The boss's got all he needs, certainly,
Eats swell,
Owns a lotta houses,
Goes vacationin',
Breaks strikes,
Runs politics, bribes police,
Pays off congress,
And struts all over the earth —

Listen, Revolution,
We're buddies, see —
Together,
We can take everything:
Factories, arsenals, houses, ships,
Railroads, forests, fields, orchards,
Bus lines, telegraphs, radios,
(Jesus! Raise hell with radios!)
Steel mills, coal mines, oil wells, gas,
All the tools of production,
(Great day in the morning!)
Everything —
And turn 'em over to the people who work.
Rule and run 'em for us people who work.

Boy! Them radios —
Broadcasting that very first morning to USSR:
Another member the International Soviet's done come
Greetings to the Socialist Soviet Republics
Hey you rising workers everywhere greetings —
And we'll sign it: Germany
Sign it: China
Sign it: Africa
Sign it: Poland
Sign it: Italy
Sign it: America
Sign it with my one name: Worker
On that day when no one will be hungry, cold, oppressed,
Anywhere in the world again.

I been starvin' too long,
Ain't you?