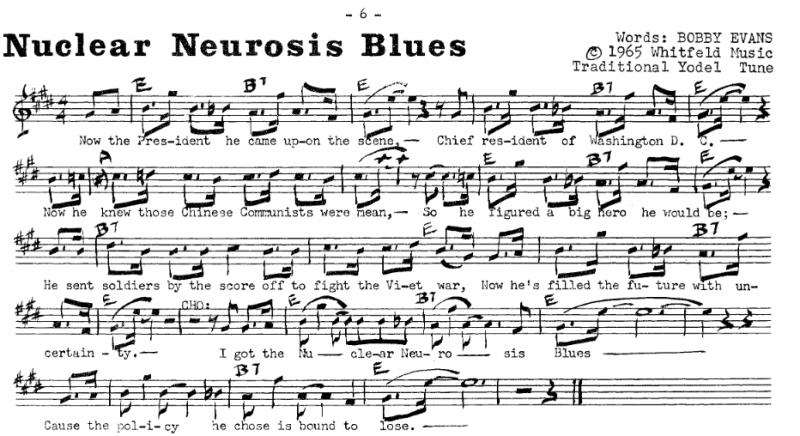 Words: Bobby Evans
Traditional Yodel Tune
Now the President came upon the scene
Chief resident of Washington D.C.
Now he knew these Chinese communists were mean
So he figured a hero he would be
He sent soldiers by the score off to fight the Viet-war
Now he's filled the future with uncertainty

Now we know that L.B.J. is quite a guy
And there's nothin' in the world he wouldn't try
But sometimes I get so scared I have to cry
'Cause I'm wonderin' if sparks are gonna fly
War-bombs made a wasteland vast
Out of Hiroshima's blast
Hey, I'm twenty-one and that's too young to die.

So I'm standin' here a shiverin' in my shoes
While I listen to the Huntley-Brinkley news
Huntley tells me of the many men we lose
Brinkley tells me that the Viet Cong refuse
To negotiate a peace
Or let their fire cease
So I pour myself a dozen shots of booze.

Now I'm layin' here upon my feather bed
And I'm singin' cause I'm stoned out of my head
Like a loaded Legionaire that's full of dread
'Bout the loathesome leadership by whom he ' s led
So I drunkenly rejoice
I ain't got no other choice
L.B.J. has planned my future far ahead.