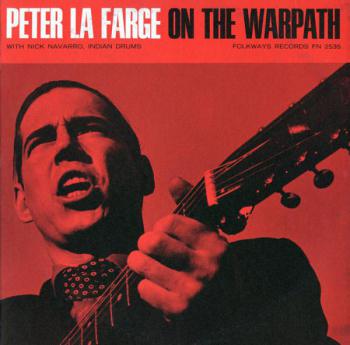 “Half-breed”, “mongrel” = mezzosangue, meticcio, nè carne nè pesce, né questo né quello…
I’ll tell you of a man, he was a half-breed too,
He knew the woods and roam’d them, he was an out-cast true.
The people they all run him off, he never came around
And when it come to hidin’, he sure could not be found.

The city that we spoke of was named for Galilee
Within a forest ocean, a mighty sea of trees
All around it in the forest Half-Breed Johnny rambled round
He knew all about eagles and where honey could be found.

Not a white man or an Indian, noparents and no land
The trees they were his teachers, theanimals his clan.
He could converse with the otter, and held forth with the bear,
They say he talked with fishes, and to birds when they were there.

Now, in the town we speak of, the new mayor had a child
A girl of six or seven, and not uncommon wild
Often she would wander and then retum to home
Till once a ﬂying squirrel tempted her to roam

She followed half a mile or more until she lost the track
Panic hit her suddenly, she knew of no way back
The forest turned and twisted all about her every way
And all her steps were wrong ones when she got lost that day.

When she turned up missing, a mighty search was called
They feared that she was murdered and worried she was mauled
They tramped the woods for miles around and helicopters ﬂew
And when all that they ﬁnished, nothing’s all they knew

Someone mentioned Johnny, and someone was laughed down
Someone spoke of woodcraft, and some said “Thatforest clown!”
Some said, “Why, he is just a bum, a dirty lost half-breed!”
But Johnny was their one hope, and they sent for him with speed.

Johnny started searching until he tracked the child
Carried her in his half-breed arms out of the forest wild
He was a hero foraday, they asked him to remain
They said they learned their lesson, that all people are the same

But Johnny said “You take your handshakes, your sidewalks and your town
Ask for me by the whipporwill, he’ll say where I’ll be found
I prefer to talk with wildcats and to hear the wild goose moan
I’m headed back to wilderness, the forest is my home.”