Margaret on the Guillotine

>>> Surely how I feel is not nothing? 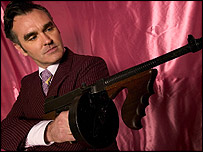 Surely how I feel is not nothing? 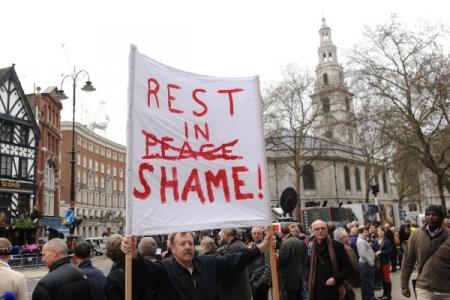 I have listened and I have seen a lack of truth that we had dared not believe existed in modern Britain. Margaret Thatcher has left the order of the world, and she is not to blame for the reports of her own death - reports so dangerously biased and full of intolerant menace that we now wonder how we can possibly believe anything that has ever been recorded in British history books. The coverage by the British media of Thatcher's death has been exclusively absorbed in Thatcher's canonization to such a censorial degree that we suddenly see the modern British establishment as an uncivilized entity of delusion, giving the cold shoulder to truth, and offering indescribable disgust to anyone unimpressed by Thatcher.

Even to contest Thatcher's worth is termed "anarchist", and this source of insanity - intolerant of debate, is spearheaded by the BBC reporting not on how things actually are on British streets, but on how they would prefer things to be. For those of us who survived despite Thatcherism, and who recall Thatcher as a living hell, The Daily Mail and The Guardian have a steadfast message for us: You are nothing. Our thoughts are further burdened by the taunting extravagance of Thatcher's funeral; the ceremonial lavish, the military salute, stripping Thatcher's victims of everything, and rubbing salt in wounds with teasing relish. It is all happening against us. In thought, we have killed Thatcher off a million times, but now that we have the reality of her death, the Metropolitan Police have set up new laws against us, and within paragraphs of law, we are not allowed to register our feelings so that anyone might overhear them. Echoes of Libya? Echoes of any Middle Eastern patch whose troubles are thought too uncivilized for a democratic England where chivalrous respect is afforded to "freedom", and where we are all servile to "democracy." It is, of course, The Big Lie. The fact that there will be such an enormous police presence at Thatcher's funeral is evidence that her name is synonymous with trouble - a trouble she brought on herself. No one wished for it, or brought it to her, yet she created her subtle form of anarchy nonetheless. BBC News will scantily report on anti-Thatcher demonstrations as if those taking part aren't real people. Lordly scorn is shown towards North Korea and Syria, and any distant country ruled by tyrannical means, yet the British government employs similar dictatorship tactics in order to protect their own arrogant interests.

There will be no search for true wisdom this week, as the BBC gleefully report how Ding Dong the witch is dead "failed to reach number 1", and they repeat the word "failed" four times within the brief report, and a shivering sovereign darkness clouds England - such identifications known only in China. There will be no report as to how "the British people have succeeded in downloading Ding dong the witch is dead to number 2", and we are engulfed in Third Reich maneuvers as BBC Radio assume the role of sensible adult, finger-wagging at that naughty public who must not be allowed to hear the song that they have elected to number 2. By banning Ding dong the witch is dead (and only allowing four seconds of a song is, in fact, a ban) the BBC are effectively admitting that the witch in question can only possibly be Margaret Thatcher (and not Margaret Hamilton), even though Thatcher isn't mentioned in the song, which is in fact a harmless, children's song written over 70 years ago. Whilst the BBC tut-tut-tutted a polite disapproval at the Russian government for sending a "feminist punk" band to prison for recording an anti-government song, they engage in identical intolerance against Ding dong the witch is dead without a second's hesitation.

Thatcher's funeral will be paid for by the public - who have not been asked if they object to paying, yet the public will be barred from attending. In their place, the cast are symbols of withering - as old as their prejudices, adroit at hiding Thatcher's disasters. Ancestry and posterity, trimmed with pageantry, will block out anyone with a gripe. David Cameron will cling to Thatcher as she clung to the Malvinas, each in their last-ditch efforts to survive obscurity. Cameron achieves his own conclusions without any regard for the appalling social record of The Thatcher Destroyer - the protestors outside are simply not being British, or, even worse, are probably from Liverpool.

When Cameron talks he is simply speaking his part, but he is adamant that the scorn Thatcher poured onto others should not be returned to her. Her mourning family must have considerations that were never shown to the families of the Hillsborough victims, and although Thatcher willingly played her part in the Hillsborough cover-up, let's not go into all that now. Instead we're asked to show respect for a Prime Minister whose own Cabinet were her rivals. Thatcher's death gives added height to David Cameron (a Prime Minister who wasn't actually voted in by the British people, yet there he is – reminding us all of our manners), and he does not understand how the best reason for doing something is because there's nothing in it for you. The words of Cameron are assumed to have weight, yet his personal gain is the only reason why he speaks those words.

Cameron tells us that the British people loved Thatcher, but we are all aware that Sunningdale and Chelsea are his Britain; he does not mean the people of Salford or Stockton-on-Tees, who are, in any case, somewhere north of Lord's Cricket Ground. Can the BBC possibly interview someone with no careerist gain attached to their dribble? No. On the day that nine British citizens are arrested in Trafalgar Square for voicing their objections to the Baroness, the BBC News instead offer their opening platform to Carol Thatcher, a dumped non-star of I'm a celebrity get me out of here, and to Sir Mark Thatcher (Sir!), unseen since the disgrace of his involvement in selling arms to countries at odds with Britain (magically, he avoided a 15-year prison term and was financially bailed out by his mother - her moral conscience nowhere in sight as Sir Mark patriotically took his 64 million and fled to Gibraltar having been refused entry to Switzerland and Monaco. What kind of mother raised such a son?) Both Mark and Carol get the BBC spotlight because they mourn their mother's death, whilst those honest civilians who mourn Thatcher's life are shunted out of view. This is how we see Syrian TV operate, and this is most certainly NOT a week when David Cameron will advise: "hug a hoodie." Whilst the quite astonishing social phenomenon of Ding Dong the witch is dead is ignored by the television news, instead we are shown an eight-minute clip of Psy, a funny little South Korean singer who is making all British newsreaders laugh with his funny little new video. Today, news items from South Korea, Belgium and China get precedence over homeland news of anti-Thatcher protests in Trafalgar Square, and the meaningless banality of Modern Media Britain casts a shameful shadow. Repeated and repeated, words strengthen.

The truth sleeps as the heartlessness of Thatcher is re-written as a strength, for it was not exclusively because Thatcher destroyed the miners or murdered the boys of The Belgrano that we feel rage, but it was the lip-smacking relish with which she did both, and with which she sent armies of police to batter anyone who opposed her view. Gaddafi did the same thing in the same way. Thatcher could never show sympathy, or empathy, or understanding to those from whom David Cameron is now demanding a show of civil respect for a woman who, like Myra Hindley, proved to all of us that the female could be just as cruel as the male. By 1990 Thatcher was the gift that not even her own Cabinet wanted, and she was tufted out of office. How could such a catastrophic end warrant a statue in Trafalgar Square? Revenge was the vital juice of every move made by Thatcher, and her results produced the most dis-United Kingdom ever seen in history. Although Thatcher was never flesh, her demeanor took on an incurably demented sadness, and her broadcasting tones registered madness … as Britain burned. From all of this we see, in this April week of 2013, that modern media reporting in Britain is a disturbing fog of taboos and prejudices, reviving the divisions that Thatcher hatched, whilst hiding her horrors.

Even in death, Thatcher remains 'the enemy within.'
And the truth sleeps.