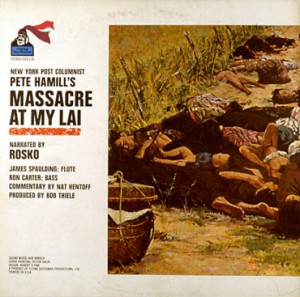 A spoken word release (Flying Dutchman # FDS-118) in which Rosko narrated the newspaper articles of Pete Hamill - an American journalist who in the 1960s wrote for the New York Post, reporting from Vietnam. (1) It took a highly critical view of the Vietnam War, the military, and the politicians of the era, such as President Eisenhower and President Nixon. Produced by Bob Thiele, founder of Flying Dutchman, it featured background music from Ron Carter (bass) and James Spaulding (flute). Nat Hentoff, music critic and historian, wrote the linear notes to the record. Hamill also wrote the words for the 1970 record Murder at Kent State University (Flying Dutchman # FDS-127).

Billboard noted the album on 28 February 1970, saying that "Bob Thiele's Flying Dutchman label again collaborated with WNEW-FM's Rosko...to spotlight writer Peter Hamill's description of the alleged 'Massacre at My Lai' in Vietnam. A dramatic contribution to anti-war literature...a followup to Robert Scheer's A Night at Santa Rita , another attempt at creative criticism against US militarism and censorship". (2) Hamill argued that while "poor, dumb Calley, will be court martialed" the politicians would be able to write their memoirs, and the military leaders would be free. But Hamill also said that following orders was not an acceptable excuse to commit a massacre. In the first track, "The War Crimes", he described the war as "the obscene slime of Asia".
Poor, lost America, clean, honorable, decent, even naive
Now wallowing in the obscene slime of Asia, in the 50s
The Republicans got away with everything because they
Had a war hero heading the cast, now we are paying for
All of it, it was Eisenhower who made Nixon respectable....
It was Eisenhower who allowed John Foster Dulles to indulge
His missionary brand of foreign policy, Nixon went on T.V. to tell
Of the communist massacres, massacres that cannot be justified...
But he only sends his press secretary to talk about Song My...
Lt. Calley, who was just another digit in a military system that has
Been morally corrupted, poor, dumb Calley, will be court martialed