>>> I defy any man or woman to listen to Jerry sing this without... 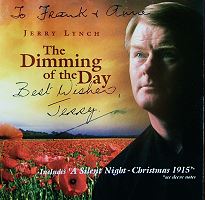 In Nov/Dec 1997 I released three tracks on a single, in advance of an album I was recording at the time, to avail of the Christmas market. One of these tracks was a song titled A Silent Night Christmas 1915. The song had been acquired by my producer, P.J. Curtis, from its author Cormac MacConnell. The album is called The Dimming of the Day ( CMCD 001 ) and was released in the spring of ’98.A Silent Night Christmas 1915 tells the story of the remarkable fraternisation which took place at various places along the Western Front in 1914 and to a lesser degree in 1915. Similar events occurred on the Eastern Front on the banks of the river Angerap in East Prussia to name but one.
Nineteen-fifteen on Christmas day,
On the Western Front, the guns all died away,
And lying in the mud on bags of sand,
We heard a German sing from no man's land.
He had a tenor voice so pure and true.
The words were strange but every note we knew.
Soaring o'er the living, dead and damned,
The German sang of peace from no man's land.

Oh silent night, no cannons roar.
A king is born of peace forevermore.
All's calm, all's bright,
All brothers hand in hand,
In nineteen-and-fifteen in no man's land.

They left their trenches and we left ours.
Beneath tin hats, the smiles bloomed like wild flowers.
With photos, cigarettes and tots of wine,
We built a soldier's truce on the front line.
Their singer was a lad of twenty-one.
We begged another song before the dawn
And sitting in the mud and blood and fear,
He sang again the song all longed to hear.

And in the morning, all the guns boomed in the rain,
And we killed them and they killed us again,
With bayonet, bomb, bullet, gas and flame,
And neither we nor they at all to blame.
There was heavy fighting right throughout the day.
For one night's peace we bloodily did pay.
At night they charged, we fought them hand to hand,
And I killed the boy that sang in no man's land.

Oh silent night, no cannons roar.
A king is born of peace forevermore.
All's calm, all's bright,
All brothers hand in hand,
And that young soldier sings,
And the sound of peace still rings,
Though the captains and all the kings build no man's land.

I defy any man or woman to listen to Jerry sing this without any tears welling up. If only the politicians of all nations would accept the madness of war and unjustified aggression.