Song by Hip Hop artist Lowkey addressing the death of Ian Tomlinson , police brutality and the lack of accountability for deaths in Police custody within the UK. 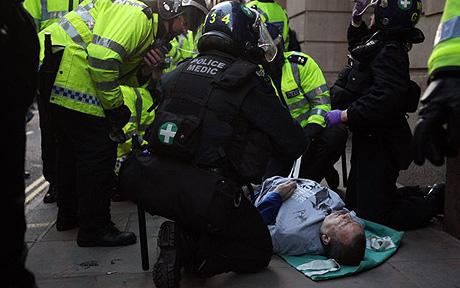 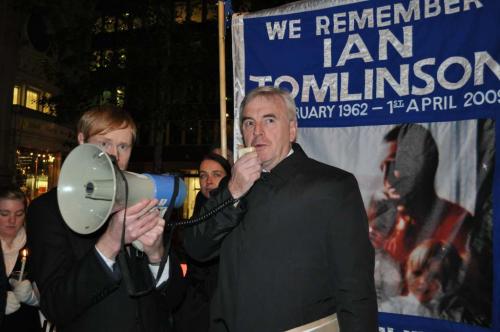 "Ian Tomlinson, an innocent passer-by was assaulted by police, and as a result he collapsed and died. His death has raised questions about the police tactics that were used. On the evening of Apr 1st, riot police violently broke up a peaceful climate camp on Bishopsgate in London. At this time most of the mainstream media had already left. The armed police, wearing helmets and balaclavas beat their way through the unarmed crowd. A number of questions go through my mind, like why were RIOT police needed to control a peaceful crowd? Why was anti-terror legislation used against anyone from filming police actions? Why did a lot of riot police have their identification numbers missing? Where was the mainstream media when all this was happening? The answer to the last question is clear. The absence of any media reporting this incident allows the police to manipulate the true story and give their version of events to the public.

However, thanks to demonstrators, members of the public and independent journalists police brutality at these events is well documented. It is now clear, that this is a vital mechanism in bringing the truth to the masses and therefore attaining justice to those who died or suffered due to police brutality or negligence.

" We want Justice"
.
"Going further away from home, I'd like to address the efforts of Mumia Abu Jamal, a key figure journalist in the exposure of police violence against minority communities. Mumia has been on death row since 1982, he was wrongfully sentenced for shooting a police officer. There is bountiful evidence, including the recantation of a key eyewitness, new ballistic and forensic evidence and a confession from Arnold Beverly (one of the two killers of Officer Faulkner) points to his innocence. On April 6 2009, the US Supreme Court rejected Mumia Abu Jamal's appeal for a new guilt-phase trial. In response, Mumia will be filing a "petition for re-hearing" by the end of April.
The Supreme Court has not yet decided whether to consider the Philadelphia DA's separate appeal, through which, the DA wants to execute Mumia without a new sentencing hearing.

One Concert – Two Cities took place that Friday Oct 15, 2009, 8:30 am State Magazine
On Friday 16th October, a unique concert took place simultaneously in Dublin and Gaza City. Transmitted from Tripod in Dublin LIVE to an audience in Gaza City celebrated Irish musicians Liam Ó Maonlaí, Lumiere, Kíla, Naisrin and Zahara El Safty were joined on the bill by Palestinian singer Shadia Mansour, renowned political activist Iraqi/English Rapper MC Lowkey and Dublin based Discovery Gospel Choir . Tickets were priced at 15 euros and available from Ticketmaster with all profits from the night went towards the rebuilding of Gaza.
Lowkey performed Licence To Kill outside New Scotland Yard as part of the Defend The Right To Protest/Against Police Violence demonstration on 23rd May 2009.

[Verse 1]
In any society Police are very necessary
But is it necessary to leave us in cemetery's
Look at the victims dead and buried because there's very many
What is the sentences there getting? Is there ever any?

What will take to get the public up in arms?
They pull out the truncheon and that's when the trouble starts
3rd of Jan 09, Riot Masks come and charge
Ambush kids and women in the Hyde Park underpass

How could you justify the figures when you count them all?
We come out to protest? Do you just come out to brawl?
Cowards and fools protect a system which is bound to fall
Bountiful evidence, still no one held accountable..

Golden Eye know your rights coz it's real
This is real life, they won't treat you like in The Bill
This one's for every innocent that died in field
Tell me who really gave them the License To Kill?

[Verse 2]
First Menezes got killed, then Dick got promoted
Then Hip Hop's lip's locked and did what they told it
No one even said a bar - A whole chain of command
responsible and not one person was ever charged

It's like we stood back, All closed our eyes
'coz If you've got a badge the laws don't apply
They tell us be patient, For justice we keep waiting
Chris Alder died on the floor of a Police Station

And not one person convicted in eleven years
But it was very clear, the footage was everywhere
I'm not intimidated - This is for families
that lost loved ones and never saw the killers faces..

Golden Eye know your rights cos it's real
This is real life, they won't treat you like in The Bill
This one's for every innocent that died in field
Tell me who really gave them the License To Kill

[Verse 3]
I can't understand coppers..– Who attack a man with his back to them,
and his hands in his pockets You can't disregard the facts
They rushed the post mortem,
at first tried to claim it was a heart attack

Not a protestor, just a working person leaving
Second post mortem? cause of death, internal bleeding
It's just manslaughter captured camcorder
Imagine that was your grandson or granddaughter

NEVER think we've forgotten them
ALL the brown and black victims treated just like Ian Tomlinson
It's something that bothers me So stuff your apology
Two things we ask for, justice and equality

Golden Eye know your rights coz it's real
This is real life, they won't treat you like in The Bill
This one's for every innocent that died in field
Tell me who really gave them the License To Kill