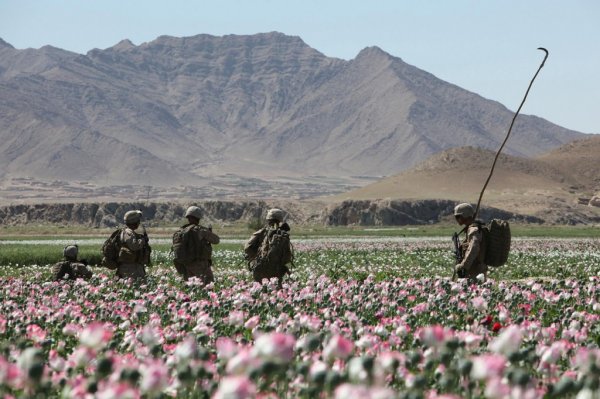 ‎
Per “Pure Number 4 heroin”, o “China White”, s’intende l’eroina più pura, la sottile polvere bianca ‎ottenuta nel corso di un delicato (e pericoloso) processo chimico di raffinazione in cui si utilizzano ‎l’etere e l’acido idrocloridrico. Infatti, nello stadio precedente di lavorazione (“Number 3 heroin” o ‎‎“Brown Sugar”), l’eroina, tagliata con la caffeina, si presenta di color brunastro.‎
Northeast Laos in 61 as the flame was lit in Vietnam
So too it was across the border
In it's rich mountain home the pink flower of the poppy bloomed
The harvest to feed the hungry farmer
‎
Among these fields the CIA would build their secret army
While the U.S. Air Force carpet bombed the mountains
Ten years in the cut, to keep the dominoes up
Killing peasants for aligning with the Russians
‎
Seeking refuge from the war thousands crammed the Plain of Jars
In the shabby camps that signified attrition
While American GI stepped firmly on the mines
Forever changed by violence and addiction
‎
From the airport at Vientiane through the cartels of the Corsicans
Came the medicine to numb the soldiers' pain
Hauled by Air America to subsidize the war
Pure Number 4 heroin
‎
Like the poppy bloomed in the highlands of the Hmong
So too it did among the Pashtuns
Fueled by an industry that cut it's teeth in war
It flourished with the Soviet invasion
‎
The country rose as the cold war closed
With a million graves that signified attrition
In desperate rage the Russian soldiers paid
Forever changed by violence and addiction
‎
But violence and greed broke the rebels fast indeed
The warlords rose above a proud and desperate land
And they built their little fiefdoms in the shadows of the mountains
With Washington Bullets in their hands
‎
From Kandahar and Helmand the cash crops flowed
Onto the broken streets of Europe and America
With CIA support, to subsidize the war
Pure Number 4 heroin