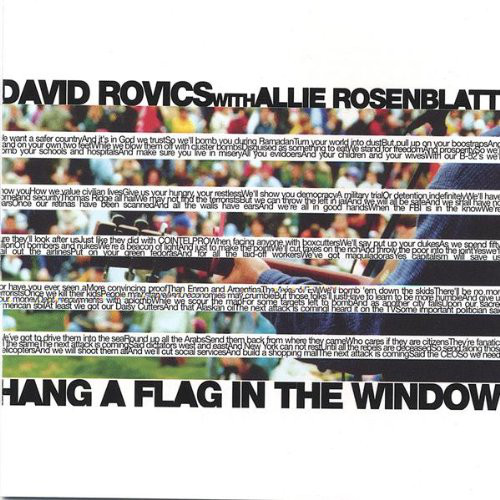 Of the twenty-one songs on this CD, eighteen of them were written since last September. George W. Bush has certainly been a great inspiration, but the general themes of my songs have not changed, only the details. Because, for the people of the world, things have not changed so much since September 11th. There was suffering and resistance before September 11th and the suffering and the resistance continues. I suppose these are the themes that have occupied my mind and my songwriting ever since I left the suburbs.

It might be said that the main theme that I keep on coming back to is terrorism. Sometimes to the terrorism of small groups of fanatics, but much moreso to the incomparably more deadly and widespread phenomenon called state terrorism. The terrorism of aiding fascist dictatorships and apartheid states. The terrorism not just of one, two or four planes, but of an air force. The millions dead from bombs and sanctions in Iraq, Afghanistan, Korea, and so many other places. The world held hostage by the IMF. The very air, water, and soil destroyed by the capitalist monolith that lies behind all of these overt and covert forms of terrorism. Before and after September 11th, long before George W. Bush was born, the United States Government has been the leading sponsor of terrorism worldwide. Sometimes people respond in kind, which is what happened on 9/11. What I seek to do here, in my own small way, is to help us think about our peculiar situation, to add one more voice of dissent against Pax Americana. And hopefully, to play my small part in finding a way out of the madness, and into an entirely different world.

The live tracks were recorded at a concert in Boulder, Colorado by Andrew Brislin of 4th Stage Studios. The studio tracks on this CD were recorded in Hyde Park, Massachusetts at Melville Park Studio, which is also where they were mixed and mastered. Duplication services were provided by the Tape Complex in Boston. The songs herein are all original songs that include me on vocals and guitar and Allie Rosenblatt on harmony vocals. The harmonies were all written by some combination of Allie and her wonderful mother, Lucy Rosenblatt.

Big thanks to Allie for being such a kick-ass singer, friend and great road rat. Thanks to Orin Langelle, Terry Flynn and arbeiterfotografie.com for the photos, to Jon Sulkow for the graphics, to all the good folks around the world who work their asses off to organize gigs for me, and to my amazing community of friends, lovers and comrades who make life worth living.

Yours for the OBU,
David

The next attack is coming
Said the CEO
So we need to drill for oil
And build more pipelines, don´t you know
If these Arabs do not like it
And we need the military here
The American people will support us
Whether out of greed or fear

The next attack is coming
I heard an Afghan child say
My family was killed
By a plane the other day
And when I grow up
I will get them back
So I say beware, America
Here comes the next attack

The next attack is coming
Said Cheney to his men
And if it doesn´t
We can make one happen again
Every war we´ve ever been in
Was started with a lie
And this war is good business
So today´s the day for you to die.