The Battlefields of Spain 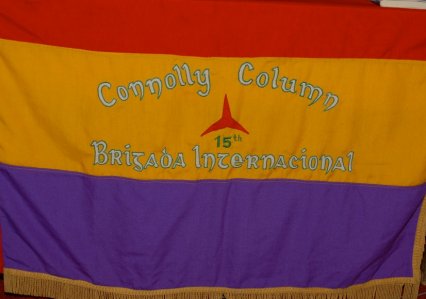 La “Connolly Column” era ovviamente intitolata al leader socialista irlandese James Connolly, fucilato dagli inglesi durante l’Easter Rising del 1916.
Oh, workers dear, did you hear our comrades' call to arms?
It echoed in the cities and it echoed on the farms,
In shipyard and in factory, and upon the fields of grain,
To defend our fellow workers on the battlefields of Spain.

John Riley was a trade union man, our shop floor he did lead,
He fought against the fascist thugs, he fought the bosses' greed,
And now he leads the Connolly Column of the bold Fifteenth Brigade,
And he's gone to fight the fascists on the battlefields of Spain.

Who will call the meeting now and who will take the chair?
And who will lead us out on strike when we demand our share?
For Johnny, brave young Johnny, at home shall not remain,
For he's gone to fight the fascists on the battlefields of Spain.

If fascist bullets won't permit our Wild Geese to come home,
Their tragic loss to Ireland we'll never cease to mourn,
For they fought for the Connolly Column in the bold Fifteenth Brigade,
And they died for the Spanish working class on the battlefields of Spain.