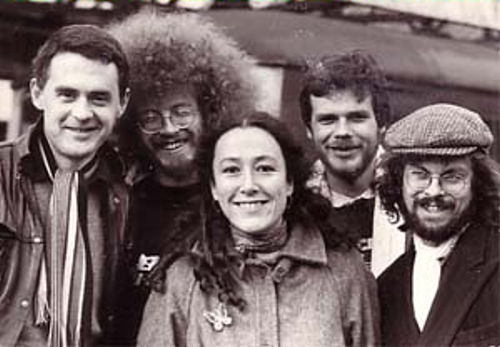 Come and be a soldier, lads, come lads, come!
Hark, don't you hear the fife and the drum?
March to the battlefield, march, march away.
Come and lose your eyes and limbs for thirteen pence a day.

Come and take the shilling lads, come lads, drink!
Come and drive dull care away, but never dare to think.
Break your mammas' hearts, lads, bid goodbye to daddy,
You shall be a general if you'll only be a swaddy.

Come along, you gaubies, come and be drilled, (1)
By a puppy of a sergeant that's not worth being killed.
You'll be made a corporal, if you're a jolly cock;
Come and be a soldier, but be in by eight o'clock.

Remember we are soldiers, the bravest of the brave;
Come and be a soldier, then you'll be a slave.
Come to Colonel White, my lads, but don't pretend to cry,
For if you are not happy we can flog you till you die.

Come and learn your exercise, lads, run, lads, run,
Soon you'll know the use of bayonet and gun.
Then you'll go abroad, my lads, and there you'll soon be warm,
By shooting men you never knew, who never did you harm.

When you are a soldier lad, if you do not limp,
You shall go recruiting, and then you'll be a crimp (2).
A lad may take your shilling when in drink he's fresh,
But you know it's quite respectable to kidnap human flesh.

Now if you shall be killed me lads, never mind that there,
You will die with honour lads, you'll be free of care.
Don't mind your wives and children, for they'll soon be forgotten,
What's wives and children to you, when you are dead and rotten?

If you should escape, lads, and get your lives away,
After a long servitude you will receive a pay;
Sixpence a day, my lads, for twelve months you'll receive,
You're titled as a pensioner, so then you need not grieve.

Did you ever think lads, or ever go to school?
He who would be a soldier must surely be a fool.
Talk of honour, that's all nonsense, oh, 'tis an idle story;
Live like honest men my lads, that is the real glory.

Oh never be so silly as to fight for kings and queens,
For none of them is not as good as half a bunch of greens;
Remember what I say, lads, it is a serious thing,
The Almighty made the human race, but never made a king.