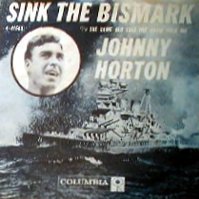 "Sink the Bismark" (later "Sink the Bismarck") is a march song by country music singer Johnny Horton and songwriter Tillman Franks, based on the pursuit and eventual sinking of the German battleship Bismarck in May 1941, during World War II. Horton released this song through Columbia Records in 1960, when it reached #3 on the charts. As originally released, the record label used the common misspelling "Bismark"; this error was corrected for later releases of the song. It was inspired by the 1960 British war movie Sink the Bismarck! and was in fact (with the producer John Brabourne's approval) commissioned from Johnny Horton by 20th Century Fox who were worried about the subject's relative obscurity. While the song was used in U.S. theater trailers for the film, it was not used in the film itself.
In May 1941 the war had just begun
The Germans had the biggest ship that had the biggest guns
The Bismark was the fastest ship the ever sailed the sea
On her decks were guns as big as steers and shells as big as trees

The Hood found the Bismark and on that fatal day
The Bismark started firing fifteen miles away
We gotta sink the Bismark was the battle sound
But when the smoke had cleared away the mighty Hood went down
For six long days and weary nights they tried to find her trail
Churchill told the people put every ship asail
Cause somewhere on that ocean I know she's gotta be
We gotta sink the Bismark to the bottom of the sea
We'll find the German battleship...

What were "guns as big as steers"? Why was "steer" used
to describe a gun on a battleship?