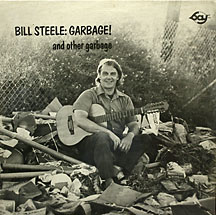 “A year before the first Earth Day observance on April 22, 1970 -- a nationwide environmental "teach-in" for 20 million participants -- folk musician Bill Steele '54 wrote one of the environmental movement's anthems: "Garbage!" Forty years on, the song still resonates as much as it did when Steele wrote it in San Francisco in 1969. "There was a big fuss in San Francisco at the time about dumping garbage in the bay, not as trash but as landfill to build new waterfront condominiums. So that sort of inspired it all," Steele says. […] The song has inspired several additional verses over the years, notably by Seeger and Mike Agranoff. Their 1977 addenda include a verse (beginning with "In Mister Thompson's factory, they're making plastic Christmas trees ...") and a new chorus, decrying the effects of corporations and capitalism.” (Fonte)
Mister Thompson calls the waiter, orders steak and baked potatoes
And he leaves the bone and gristle and he never eats the skins
And the waiter comes and takes it, with a cough contaminates it
And he puts it in the can with coffee ground and sardine tins
And the truck comes by on Friday and takes it all away
And a thousand trucks just like it are converging on the bay
Oh - garbage
They're filling up the sea with garbage
What will they do
When there's no place left to put all the garbage

Mister Thompson starts his Chevrolet, drives it down the motorway
Leaving friends and neighbours in a hydro-carbon haze
He's joined by lots of smaller cars all sending gases to the stars
There to form a seething cloud that hangs for thirty days
And the sun licks down into it with an ultra-violet tongue
Turns it into smog, and it settles in our lungs
Oh - garbage
They're filling up the sky with garbage
What will they do
When there's nothing left to breathe but garbage

In Mister Thompson's factory they're making plastic Christmas trees
Complete with silver tinsel and a geodesic stand
And the plastic's mixed in giant vats from some conglomeration that's
Been piped from deep within the earth or strip-mined from the land
And if you ask them questions they say, Can't you see
It's absolutely needed for the economy
Oh - garbage
Their stocks, their shares all garbage
What will they do
When their system goes to smash
There's no value to their cash
No money to be made
But there's a world to be repaid
When the kids will read in history books
Of financiers and other crooks
Feudalism and slavery
Nuclear power knavery
To history's dustbin they're consigned
Along with all the other kinds of garbage