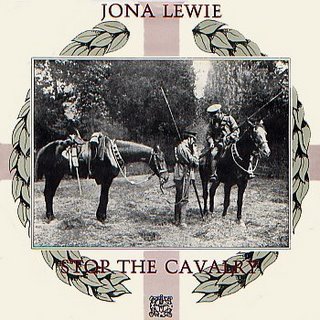 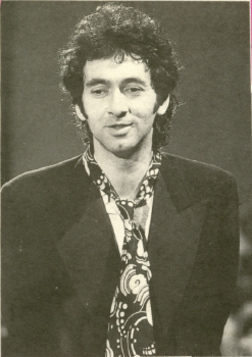 Jona Lewie.
"Stop The Cavalry" is a song written and performed by the musician Jona Lewie.

The song peaked at number three in the UK Singles Chart in December 1980, at one point only being kept from number one by two re-issued songs by John Lennon, who had been murdered on 8 December.

The song was never intended as a Christmas hit, but the line 'Wish I was at home for Christmas' as well as the brass band arrangements made it an appropriately styled song to play around Christmas time.

The song is set at the front during a British war, though references to cavalry, Churchill and nuclear fallout make its exact chronology indeterminate. Lewie described the song's protagonist as being "a bit like the eternal soldier at the Arc de Triomphe" — in other words, representing all soldiers in all wars (as evidenced by the line "I have had to fight, almost every night, down throughout these centuries") rather than any specific conflict. However, the song's promotional video is set in the trenches of the First World War.

The song's melody is loosely based on a theme from Swedish Rhapsody No. 1 by Hugo Alfvén, and its major musical elements copied directly from Mozart's Rondo in D Major, K382. "Stop the Cavalry" reached #2 in Australia behind Slim Dusty's 'Duncan'.

Jona Lewie's version was issued by Stiff Records (catalogue number Buy 104). In 1981, Stiff Records brought together the Gwalia Singers (Swansea) — a Welsh male voice choir — and the Cory Band to record a new arrangement of the song (catalogue number Buy 133). This version remains one of the most requested of all holiday songs in parts of the USA and it has been suggested that it is "probably the most popular song ever by an artist who never had a charted recording".

Both versions of the song are currently owned and licensed by Union Square Music Licensing.

From 2008 the song has become the walk on tune for Lancastrian amateur boxer Jamie 'The Woolman' Barnes, with his coaching team known as the Cavalry and his small promotional company known as Cavalry Productions. Whilst Barnes has never met Lewie, he said in an March 2008 interview with Boxing Weekly, that if he ever turns professional he will ask Lewie to sing the song live as he enters the ring. - en.wikipedia
Hey, Mr. Churchill comes over here
to say we're doing splendidly
But it's very cold out here in the snow,
marching to win from the enemy
Oh I say it's tough, I have had enough
Can you stop the cavalry?
I have had to fight, almost every night
down throughout these centuries
That is when I say, oh yes yet again
Can you stop the cavalry?
Mary Bradley waits at home
in the nuclear fall-out zone
Wish I could be dancing now
in the arms of the girl I love

Wish I was at home for Christmas
Bang! That's another bomb on another town
While Luzar and Jim have tea
If I get home, live to tell the tale
I'll run for all presidencies
If I get elected I'll stop - I will stop the cavalry