The Ballad Of John Henry Faulk 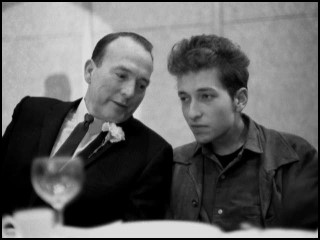 On the TV and the radio John Henry Faulk was known.
He talked to many thousands with a mind that was his own,
But he could not close his eyes when the lists were passed around,
So he tried to move the Union to tear the blacklist down.

Then slowly, oh so slowly, his life began to change.
People would avoid his eyes, his friends were actin' strange,
And he finally saw the power of the hidden poison pen
When they told him that his job was through, he'd never work again.

And he could not believe what his sad eyes had found.
He stared in disbelief as his world came tumblin' down,
And as the noose grew tighter, at last the trap was clear:
For every place he turned to go, that list would soon be there
-- Oh, that list.

His wife and children trembled, the time was runnin' short,
When a man of law got on their side and took them into court,
And there upon the stand they could not hide behind their eyes,
And the cancer of the fascist was displayed before our eyes.

And you men who point your fingers and spread your lies around,
You men who left your souls behind and drag us to the ground,
You can put my name right down there, I will not try to hide --
For if there's one man on the blacklist, I'll be right there by his side.

For I'd rather go hungry to beg upon the streets
Than earn my bread on dead men's souls and crawl beneath your feet.
And I will not play your hater's game and hate you in return,
for it's only through the love of man the blacklist can be burned.